A Long, Complicated Battle Over 9,000-Year-Old Bones Is Finally Over

“The most significant human skeleton ever discovered in North America,” he’s been named. Kennewick Man is a 9,000-year-old Paleoamerican who was discovered in Kennewick, Washington, in 1996.

For archaeologists, however, the discovery was more than an exciting moment; it sparked a legal battle that lasted more than two decades.

Kennewick Man’s story will eventually come to an end with a Native American burial, according to Nicholas K. Geranios of the Associated Press.

According to Geranios, the United States Army Corps of Engineers has finally ruled Kennewick Man to be linked to modern Native Americans, allowing the remains to be claimed and ultimately buried under the Native American Graves Protection and Repatriation Act.

Once tests confirm the affiliation of the remains, the law allows for the Native American nations to determine how to dispose of them. And that’s just what they intend to do.

When the skeleton of the Paleoamerican was found, it was heralded as a priceless glimpse into the past.

The sheer age of the largely intact skeleton made it a coveted artefact for scientists, who hoped to use it to identify the origin of early Americans’ migration. 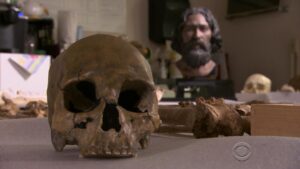 But the first scientists that studied the remains described a “lack of Native American characteristics” in the skeleton, sparking a debate over its origins that’s raged ever since.

The skeleton was found on federal land, so it technically fell under U.S. Army Corps of Engineers’ control. But five Native American nations claimed that the “Ancient One” was in fact Native American and should be repatriated under NAGPRA.

This assertion was controversial until a 2015 study showed that Kennewick Man was in fact Native American.

Though the DNA evidence from this study didn’t link him to a particular nation, it showed that his genome was more closely related to modern Native Americans than any other modern human in existence.

As Ben Guarino reports for The Washington Post, that new information overrode the results of a lengthy legal battle between the Yakama, Wanapum, Umatilla, Colville and Nez Perce nations who claimed ownership of the skeleton and the scientists who argued that they should be able to study it.

But the 2015 DNA analysis blasted the debate open once more, and when University of Chicago scientists independently validated the analysis this month, the U.S. Army Corps of Engineers decided to acknowledge that Kennewick Man is in fact related to Native Americans in the Pacific Northwest.

Now that the Ancient One has been proven to be Native American, writes Lynda V. Mapes for The Seattle Times, the five groups who fought so hard to reclaim him will join together to bury him.

While they work to determine where and how to inter Kennewick Man, the skeleton will remain at the Burke Museum in Seattle, writes Mapes. In an FAQ about Kennewick Man, the museum notes that tribal community representatives conduct “authorized ceremonial activity” at the museum.

Throughout the long battle, Native American leaders never doubted Kennewick Man’s connection to their people. Just one year after Kennewick Man was unearthed, Armand Minthorn, a Umatilla trustee and religious leader, told Archaeology’s Andrew Slayman: “If this individual is truly over 9,000 years old, that only substantiates our belief that he is Native American.

From our oral histories, we know that our people have been part of this land since the beginning of time….We already know our history.”

Chuck Sams, a Umatilla spokesperson, echos that sentiment. He tells Mapes that “[Kennewick Man] has been displaced, and we continue to offer our prayers and our hopes for a safe journey back to the land again.”