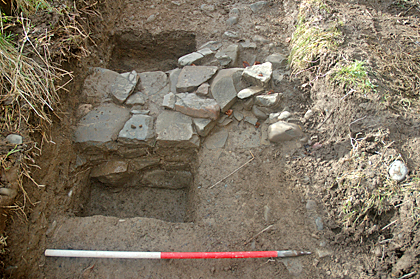 German and Dutch pots, jugs and mugs, coins including an American penny, spindles, a sheep skull, and horse teeth have been Discovered by archaeologists digging in the Scottish Borders, where doors integrated into walls have revealed a “lost” Medieval village of families, farmyards and hearths.

Between Edinburgh and the Northumberland National Park, the outskirts of Selkirk have previously been associated with the Battle of Philiphaugh, a 1645 victory for the Scottish Covenanter Army against their under strength Royalist enemies.

A pipeline laying project by Scottish Water, though, has found stone brick structures including 2 pivot stones, used as hinges for doors between the fourteenth and sixteenth centuries but turned into cobbling after their buildings were demolished.

“These investigations show that there was a thriving farming community in the immediate area – one that was ‘lost’ in the later farming improvements that restructured farms and fields,” said Susan Ramsay, of the researching team.

“The recovery of clay tobacco pipes, glass bottles, and coins that date from the eighteenth and nineteenth centuries, particularly from near Old Mill Farm, confirm the later activities in that area.

“The radiocarbon dates confirm activity in the period from 1472 to 1645. Although the artifacts were recovered from the lower plow soil rather than sealed archaeological contexts, they too support a late fifteenth to seventeenth-century date.

“Two pottery sherds from stoneware bottles, or possibly drinking mugs imported from Germany or Belgium, would date to that period.

A fragment of a clay tobacco pipe identifies the maker as James Colquhoun, who manufactured pipes in Glasgow between 1660 and 1680.

“These artifacts also suggest that manufactured goods were being traded from urban areas to the rural areas of Scotland.”

Dr. Tom Turpie, a Medieval History expert from the University of Stirling, said the earliest reference to Philiphaugh originated from the reign of Robert I, although one mention of the town when it was said to have had a tower, fortalice, manors, gardens, orchards, and mills, came from 1582.

“On 10 March 1316, Robert granted the western part of the lands of Philiphaugh to one William ‘called Turnbull’,” he explained.

“On the same day, the eastern part of the lands of Philiphaugh was confirmed to William Barbitonsor.

“It is possible that the lands of Philiphaugh belonged to the Abbey of Kelso prior to the Wars of Independence [1286-1328].

“The lands of ‘Phillophauch’ were additionally included in a record of the abbey’s rental income which was made in around 1567.”

4 medieval pottery sherds and 67 metal artifacts, from the past two centuries, were discovered.

“What cannot be determined at the moment is whether the Buildings, indicated by the structural remains, were in use at the same time,” said Ramsay.

“The differences in building style suggest that buildings were replaced and that the settlement moved after some time.

“The antiques cover a wide date range, which, along with the variations in the construction of walls and surfaces, suggests that several different phases of building and occupation might be present.

“The recovery of the 2 pivot or swivel stones, as well as small quantities of daub, show’s that timber buildings of possible medieval or earlier date occupied the site.

“The historical research and the limited archaeological proofs point to a small farming settlement that was established in the late 15th or early 16th century and covers the transition between medieval and post-medieval periods.

“The historical evidence Shows that houses and farms were known in this area but it does not identify their location, while the archaeological evidence can provide some indication of the location of structures.

“The site and surrounding area are well known for the Battle of Philiphaugh in 1645. Contemporary accounts refer to ditches, dikes, and hedges that indicate field systems, however, they do not mention houses or buildings, which could suggest that the farms or small holdings had been abandoned by that time.”

2 bronze and copper halfpenny coins were used during the reigns of George II and George III, and a Lincoln cent, from 1959, has the Abraham Lincoln Memorial on its reverse.

A “typical” assemblage of 40 fragments of glass had its earliest origins in the early eighteenth century, which analyst Robin Murdoch called “by no means unusual.”

“The quick spread of the use of glass wine and beer bottles in the 18th century was usually the first time that such containers became part of the general social fabric,” he pointed out.

“From the beginning of the 2nd quarter of the 19th century, a whole range of glass containers for all sorts of uses began to be made – many preferred to use ceramics because of the ability to view the contents.

“There are several examples in the assemblage and also some later twentieth -century material.”

Archaeozoologist Catherine Smith reported “at least” three lower cheek teeth from horses, as well as sheep bones left in a cut through pit among the fields.

“They were not heavily worn and came from an animal which was probably adult at the time of death,” she said of the equine molars.

“The sheep remains consisted of a fragmentary skull, joined by separate maxillary fragments and both left and right mandibles.

“The nasal region of the skull was absent. The skull associated with the mandibles was fairly small and hornless.”

“In the modern period, horn lost its value as a resource with the advent of synthetic plastics.

“This may indicate that the remains post-date the medieval period, although the small size of the skull is a medieval feature.”