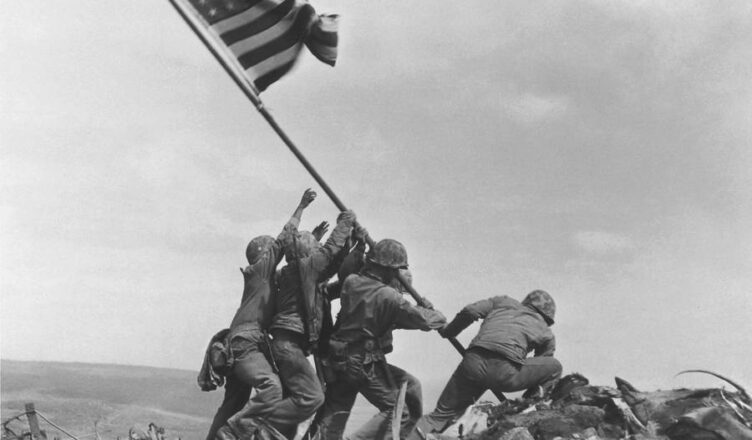 Ira Hayes: What happened to the Native American who helped raise the flag on Iwo Jima

Ira Hayes was born to Nancy and Jobe on the Gila River Indian Reservation in Arizona in 1923. Both of his parents were members of the Pima Indian tribe, who had lived in the area since well before the first Europeans encountered them in the late 17th century.

The year of their son’s birth, Nancy and Jobe were still not classified by the United States as citizens. Although Congress passed the Indian Citizenship Act in 1914, Arizona did not allow Indians to vote until 1948. Despite their lack of recognition by the government, the Hayeses proudly kept an American flag displayed on a wall in their home.

Ira was a quiet child and according to acquaintances, he “could be in another’s presence for hours without talking.” Despite his silence, Ira had a sharp mind and was a voracious reader.

Ira Hayes Enlists In The Marines

Hayes was working as a carpenter when the Japanese attack on Pearl Harbor in December of 1941 brought the United States into World War II. He enlisted with the Marines in 1942 and after successfully completing his boot camp training, volunteered to join the elite paratrooper division.

This was no small feat. Paratroopers were a new type of soldier in the ancient realm of warfare and training at the exclusive paratrooper school was notoriously intense.

Hayes became the first Pima in history to receive his paratrooper wings and was given the nickname “Chief Falling Cloud” upon his graduation from the U.S. Marine Corps paratrooper school. His friends and family back home on the reservation were thrilled, with one recalling, “He made us proud to be Pimas.” This celebratory period would soon seem like a distant memory to Hayes and his fellow paratroopers when they shipped off to the Pacific theater a few months later.

The Marines underwent their trial by fire at Bougaineville, a harrowing campaign to drive the Japanese out of the Solomon Islands in 1943 and 1944. But it would be the bloody battle of Iwo Jima that sealed Hayes’ place in history.

Raising The Flag On Iwo Jima

The taking of Iwo Jima was vital to U.S. strategy in the Pacific, as the tiny island’s proximity to the Japanese mainland made it ideal to serve as a base for aerial missions against the Axis power. On Feb. 19, 1945, Marines began landing on Iwo Jima. The island was defended by over 20,000 Japanese soldiers deeply entrenched in fortifications and more than willing to fight to the death. Only 200 of them would survive the battle.

Mount Suribachi, an inactive volcano, was the highest point on the island and of tremendous strategic and symbolic importance. After four days of vicious fighting, the Marines made their way onto the mountain’s slopes.

As AP war correspondent Joe Rosenthal pulled up to the shore on a landing craft, he received word that a group of Marines was planning to put a flag on Suribachi’s peak. Rosenthal made his way up the volcano escorted by two Marines, stepping over the Japanese dead who lay scattered over the slopes. When they finally reached the peak, Rosenthal spotted the group of Marines preparing to raise the flag and snapped what would become one of the most famous photos in American history.

The group of Marines consisted of Harold Schultz, Michael Strank, Franklin Sousley, Rene Gagnon, Harlon Block, and Ira Hayes. The other soldiers still fighting on the mountain burst into cheers when they saw the stars and stripes fluttering above them. Although Iwo Jima’s most glorious moment would be preserved forever on Rosenthal’s film, the victory had come at terrible cost. American casualties numbered over 6,000 dead and 17,000 wounded. Three of the men in the photo wouldn’t leave the island alive.

Ira Hayes and the other flag-raisers were ordered to Washington, D.C. to meet with the president in April 1945. The Marines still fighting in the Pacific had not realized that Rosenthal’s picture (and they along with it) became famous immediately upon its publication, appearing on front pages across the U.S.

The Pulitzer Prize Board, which normally only awards its prestigious prize to photos taken the preceding year, made an exception and awarded Rosenthal the Pulitzer in 1945. The photograph has since become the most reproduced photograph in history.

When Hayes returned home, he was feted by the nation as a war hero. He was lauded by politicians, taken across the country to sell war bonds, and was even recruited to play himself in the John Wayne movie Sands of Iwo Jima. He received hundreds of letters from admirers, and visitors flooded the reservation where he had once found solitude. People would walk right up to him and ask, “Are you the Indian who raised the flag on Iwo Jima?”

But all the public adulation could not erase the horrible memories forever seared in Hayes’ mind. Rather than embrace his publicity tour as his golden ticket out of the war, Hayes longed to return to his comrades and battle.

He never felt comfortable being called a hero, when, as he explained it, “only five men in my platoon of 45 survived when only 27 men in my company of 250 managed to escape death or injury.” He could never reconcile his celebrity status with the idea that so many of his friends still lay in the ground at Iwo Jima, stating, “They were better men than me and they’re not coming back, much less back to the White House, like me.”

Hayes turned to alcohol to try and help ease the pain of his survivor’s guilt and the traumas he had experienced. He came to regret being part of the historic photo, once despairing, “Sometimes I wish that guy had never made that picture.”

In November of 1954, the U.S. Marine Corps War Memorial was unveiled at a dedication ceremony in Washington, D.C. It was attended by Hayes and President Dwight Eisenhower, who praised the Pima Marine as “a national war hero.” The statue was a bronze replica of the photograph that had turned out to be more of a curse than a blessing.

Ten weeks after the ceremony, Ira Hayes was dead. He was found on the ground outside his home in Sacaton, Arizona in the frigid January temperatures. The coroner ruled that his death was the result of alcohol poisoning and exposure. He was just 32 years old.

Thousands of people came to pay their respects to the Marine who was declared, “A hero to everyone but himself.” Ira Hayes was laid to rest in Arlington National Cemetery, finally at peace and reunited with many of his comrades-in-arms.