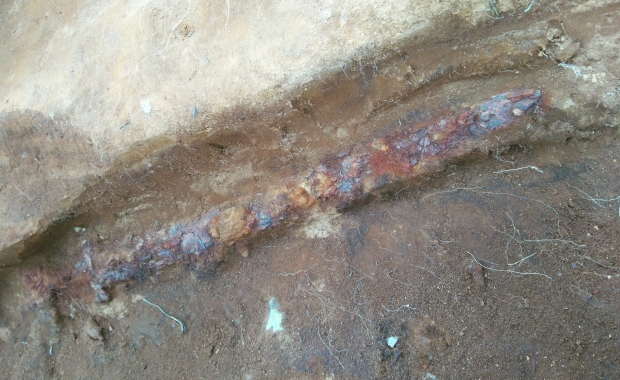 100’s of items have been discovered at the site, among them 2 swords, 3 spears and 3 shields.

2 out of 6 burials fully explored

A total of 6 Viking age graves have been found at the site, including 2 confirmed boat burials. Only 2 of the burials have been fully excavated and archeologists are currently exploring the third burial.

The site is unusual for many reasons, not least that 2 boat burials have been discovered: Viking age boat burials are very rare in Iceland.

The site has been badly damaged by erosion. Almost half of one of the burials already excavated had been washed away by the sea.

Hildur Gestsdóttir, who is in charge of the dig, told the local news site Vísir that despite the erosion the site had already yielded so many items the team no longer took any special note when new skulls or weapons were discovered.

“We are now finishing excavating the 3 burial of 6 we have located. It has been damaged by erosion, and it seems grave robbers have also disturbed this burial at some point. …

2 swords, 3 spears, three shields and peals, its a lot of stuff, and we are no longer surprised when we find new items.”

Another reason the site is unusual is the size of the burials found: “All the burials are huge, we are talking about Eight, and even Nine meter long burial mounds, far larger than anything we have seen at other sites.

We have been speculating if this is connected to some regional tradition not found in other parts of Iceland.”

The items recovered from the site have yet to be analyzed and dated, but the archaeologists working at the site belive the burials date to the 10th-century, to the time Iceland was being settled or shortly thereafter.

The graves already excavated seem to have belonged to men of high status and significant wealth, as only chiefs could afford to be buried in boats. The size of the mounds could similarly point to the significance of the site.

The fact that the graves seem to have been left mostly undisturbed by grave robbers is also unusual.

Many Viking age burials found in Iceland have been disturbed and robbed. For example, the 2nd  boat grave which was discovered at Kumlholt 11 years ago had been opened and disturbed at some point.

Archeologists have determined that burial mounds were usually re opened and robbed relatively shortly after they were constructed.

It is impossible to know what valuables and artifacts have been removed from disturbed graves.

The area where the ship burial was found is known as Dysnes, a name which points to Viking age graves, as dys is an old word for burial mound. The word Dysnes could be translated to “Burial ness”.