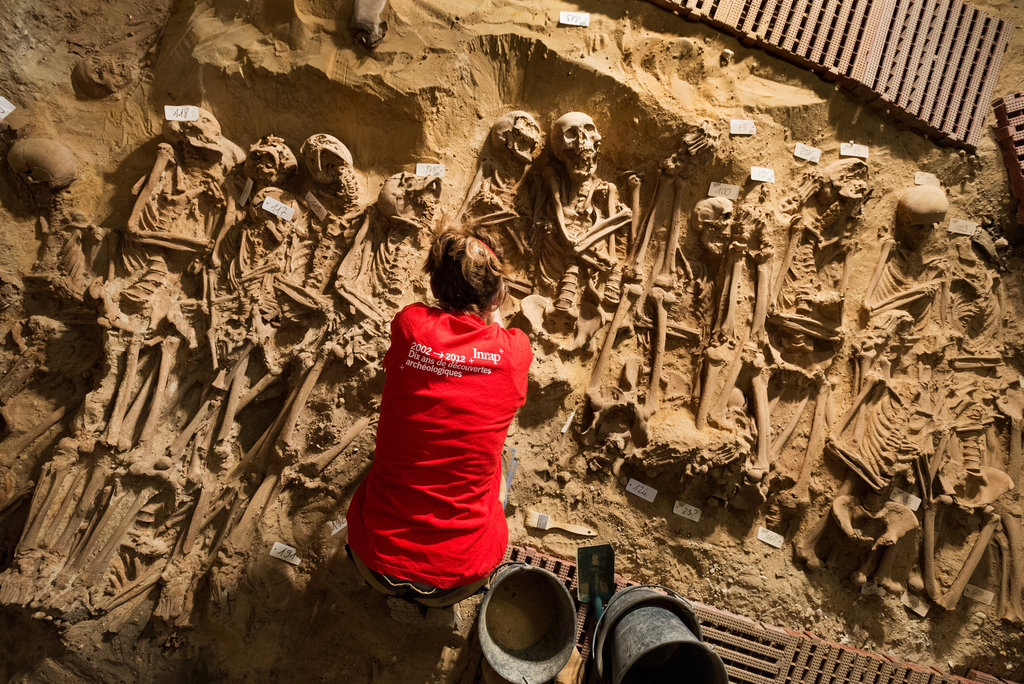 PARIS — Past the racks of hair accessories on the ground floor of the Monoprix supermarket on the corner of the Rue Réaumur and the Boulevard de Sébastopol in the 2nd Arrondissement, there is a door marked staff only.

Slip through that passageway and turn left down a spiraling metal staircase into the cellar. Past pallets of juice and soft drink bottles, down another flight of stairs, you will find a grim reminder of Paris’s history: a mass grave, with row upon row of medieval skeletons, 316 altogether.

Archaeologists believe the discovery is part of the cemetery of a medieval hospital called the Hôpital de la Trinité that used to stand nearby.

The long-buried mass grave is a reminder that Paris, for all its surface grandeur, is still replete with undiscovered archaeological fortunes & Treasure, some grand, others much more horrible.

For archaeologists, though, grisly can be good.

“Each dig is an event, but a cemetery is even better, because you have a real population at hand,” said Boris Bove, a student of History and professor at the Université Paris 8 who recently co-wrote a book on the French capital in the Middle Ages. “Most of the time, you only stumble upon buildings.”

The skeletons were excavated by a team from France’s National Institute for Preventive Archaeological Research, or Inrap, led by Isabelle Abadie, an anthropologist and archaeologist.

“There are babies, there are young children, there are teenagers, there are adults, men, woman, elderly people,” Ms. Abadie said on a recent afternoon at an Inrap warehouse in La Courneuve, a suburb on the northern outskirts of Paris, where the skeletal remains are now housed.

Isabelle Abadie, an anthropologist and archaeologist, and her team spent 2 and a half months excavating remains.

“This was a mortality crisis, that much is clear,” she included, gesturing toward stacks of crates that contained 100’s of numbered plastic bags, each of them full of bones tinted brown by the passing of centuries. Nearby, some of the remains had been precisely washed with water and toothbrushes and left to dry on metal trays.

Ms. Abadie and her team spent 2 and a half months excavating the remains from 8 different graves covering more than 1,000 square feet, sometimes up to 5 people deep. In the main pit, 175 bodies were neatly aligned head to toe.

Those found in the other, smaller graves were jumbled together — a sign, perhaps, of the rush to bury the dead during a worsening epidemic.

DNA testing and carbon dating could take months, so it is too soon for Ms. Abadie to know for sure when or how the bodies came to be buried where they were.

“It could be the plague, it could be a starvation, it can be many things at this stage — yet there are no traces of trauma, so these are not deaths linked to an act of violence or war,” she said.

Mr. Bove, the historian, said Paris was struck by the plague, like much of Europe, amid the great epidemic of the late 1340s. “We can’t give an outright number, but it would not have been unlikely that the city lost a third of its population,” he said.

Pierre Vallat, deputy regional director for Inrap, said the Hôpital de la Trinité was built outside city limits in the early thirteenth century and had at different times served as a shelter for the poor and for pilgrims, a place of religious training that put on biblical plays, an infectious disease center and even a vocational school for children.

Mr. Vallat and Ms. Abadie said the discovery was the 1st medieval hospital setting to be excavated in Paris.

Being able to study the remains of those who lived in the capital, not in distant provinces, would yield valuable information on decisions made by those in power and how they affected the population.

“The historical backdrop of this hospital really bears witness to the whole history of France,” Mr. Vallat said. “This is a total history, not just the history of the rich and famous. This isn’t Versailles.”

The contents of many medieval cemeteries were transferred into the Paris catacombs in the late eighteenth century, though some of the remains at this burial site might have been overlooked when the hospital closed during the French Revolution and, in 1812, when it was finally dismantled and the site was covered up by new construction.