The First Romans Were Black People Called The Etruscans

They gave us the word “person” and invented a symbol of iron rule later adopted by the fascists. Some even argue it was they who really moulded Roman civilisation.

Yet the Etruscans, whose descendants today live in central Italy, have long been among the great enigmas of antiquity. Their language, which has never properly been deciphered, was unlike any other in classical Italy. Their origins have been hotly debated by scholars for centuries.

Genetic research made public at the weekend appears to put the matter beyond doubt, however. It shows the Etruscans came from the area which is now Turkey – and that the nearest genetic relatives of many of today’s Tuscans and Umbrians are to be found, not in Italy, but around Izmir.

Black people were the first people on earth. And, as historians, researchers and archaeologists prove that, for thousands and hundreds of years, Black people dominated much of Europe, before the European (Caucasians) stock moved in.

Italy, known for being the residence of Rome, was originally inhabited by the Etruscan Blacks.

Legends say they were descendants of refugees from the fallen city of Troy, led by the swarthy (dark-skinned) prince Aeneas after the city fell to the Greeks. Whether this legend is true or not, the pieces of evidence below clearly point that Rome was first owned by Blacks.

The statues and art of the Etruscans revealed them to be Africans – black people. History shows that they were sensual and creative people. The city of Rome was originally known as Ra Ouma which means a ” place protected by Ra “.

This worship of Ra, undoubtedly by the Etruscans, means that they most likely had a spiritual, physical and cultural link to Kemet (kmt), ancient Egypt or Phoenicia. In archeology, findings show that two African peoples, the Sicani, and the Liburni occupied ancient Italy.

The Roman writer Virgil revealed that the Pelasgians, the Kemetians (Black people) who settled in southern Greece, also occupied the Palatine, one of the seven hills of Rome. The Romans later became a ” Latin” people and became a mixed race.

But the African element played a major part in Rome’s history. The Blacks were everything, from charioteers to soldiers, generals, and Emperors. Rome’s famous Oracles were the Sibyls, African prophetesses, who wrote the famous Sibylline Prophecies. These writings were later plagiarized by the Christians. It was the African Sibyls who built the original Vatican, which was a temple to Mami Wata, goddess of the sea.

Now, before we go further, we must state that many accounts about the origin of Rome that is found on the internet or even in modern books are lies. They are Caucasian versions to usurp the true identity of the Etruscans, who occupied Etruria (ancient Rome, Greece, and parts of Aegean).

The albinos (Caucasians), who were called “the Latins” started to migrate from the Eurasian plains to Italy. They most likely traveled with Hellene’s people into Greece and then moved further into Italy, which was a Black territory.

It is important to note that the first original Black inhabitants were not just limited to Italy (Rome), but stretched to Greece, and the Aegean area. When the threats and violence from the White invaders increased, the Blacks of these areas formed a coalition.

A large number of them packed up their belongings, boarded their ships and moved out of their land. Some of the people stayed back, to defend their lands and deal with the white Etruria.

The Etruscans (Black owners of Rome), had a unique way of building their homes and cities. They built their houses on steep hills, which were surrounded by thick walls. Caucasian-Roman mythology claims that the white Romans built the first walls, but according to factual history and accounts of the Etruscans, the Blacks built the ancient walls of Rome and the Vatican.

Below are a few pictures which are evidence of the Black identity of the first Romans: 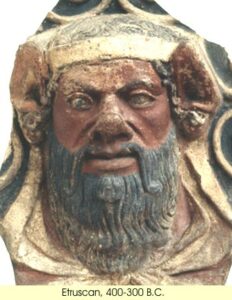 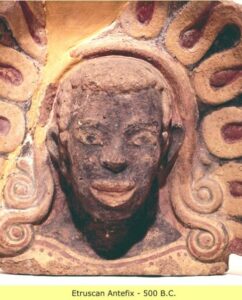