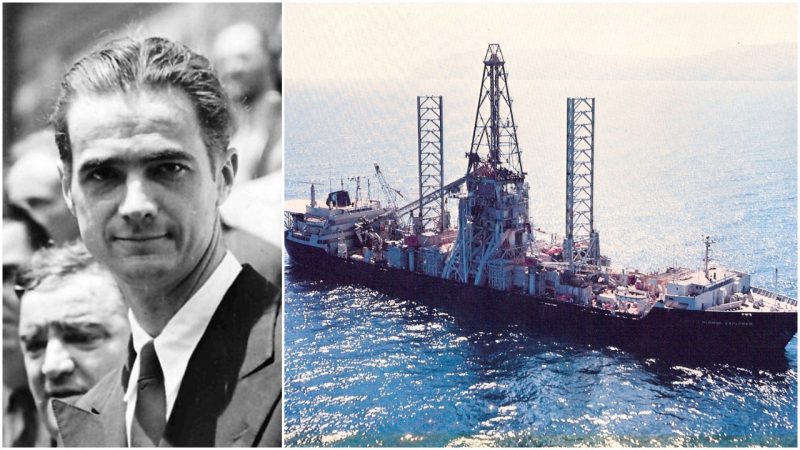 Project Azorian: Howard Hughes’ secret mission, which involved the CIA and a missing Soviet submarine off the coast of Hawaii

The industrial magnate and aviation innovator Howard Hughes gave in 1974 an enormous announcement: his company was looking for a valuable metal source in the bottom of the ocean.

The object of Hughes’ desire appeared to be a mysterious and rare product of the ocean’s depths called manganese nodules. These rock concretions on the sea bottom are formed of concentric layers of iron and manganese hydroxides around a core and have been a subject of both debate and research since the 1960s.

The expert who first pointed out the economic potential of manganese nodules was John Mero, who audaciously stated that if only 10 percent of the nodules were to be mined, they could provide enough metal to support a world of 20 billion people for thousands of years.

Having learned this, Hughes built a gargantuan ship and sent it to the middle of the Pacific Ocean where the deep-sea excavation was to take place.

The USNS Hughes Glomar Explorer was equipped with cutting-edge mining and diving technology, including a towering rig and the latest in drilling gear. The ship was set up to go down some three miles below ocean’s surface in search of the precious mineral.

But there is more than meets the eye in this story. Even though the idea of mining manganese nodules sounds great, it wasn’t really why the Glomar Explorer was sent to the Pacific.

The reason behind the expedition was of far more conspiratorial nature. It involved the CIA, a missing Soviet submarine carrying nuclear missiles, and one of the biggest marketing stunts of the 20th century.

Now, let’s start from the beginning. In February 1968, a Soviet diesel-electric powered submarine designated as K-129 was on a 70-day ballistic-missile combat patrol in the Pacific, when it suddenly cut communications with its headquarters and went missing in mid-March.

Soviet naval authorities launched a search but with no success. In the meantime, the United States Navy managed to locate the wreckage some 90 nautical miles southwest of Hawaii.  Since it was an extremely delicate matter, the U.S. decided to wait and conceive a plan of how to retrieve such a valuable asset from the enemy at the height of the Cold War. This was the inception of an operation that would later be titled Project Azorian.

So they waited for six years. During this time, the CIA was far from idle―they devised a plan which enabled them to make an attempt at retrieving the K-129 in plain sight. So this was when Howard Hughes was asked for a favor by the government.

His ship looked like a magnificent mining vessel on the outside, but on the inside, it was straight out of a James Bond movie. Its bottom was designed so that the 330-foot Soviet submarine could be pulled from below and fit within its hull. The “Capture Vehicle” was a large mechanical claw designed to be lowered to the ocean floor, grasp around the targeted submarine section, and then lift that section into the ship’s hold.

Ambitious as Project Azorian sounds, the entire operation cost the U.S. government around about $800 million ($4 billion in 2017 dollars).

They were hoping to retrieve its nuclear warheads, the codebook, and other means of Soviet naval communication that could give them an edge in case of potential conflict with the Soviet Union―which was constantly lurking in the shadows.

Unfortunately, all they managed to excavate were parts of the submarine’s hull and six drowned sailors. The excavated section of the submarine contained two nuclear torpedoes, so the authorities decided to settle with this capture, declaring the operation partially successful.

The sailors were given a funeral ceremony at sea but were confined in special metal coffins because of the risk that their bodies might have been exposed to radiation. The ceremony was filmed and a copy of the film was given to the Russian Government in 1992 and subsequently shown to the families of the deceased seamen.

The cover story actually worked long enough for the CIA to conclude that the plan was not going to work. The story published in The New York Times in 1975 exposed the operation, opening a fierce debate s the CIA blatantly attempted to prevent any publication about Project Azorian.

It led to the introduction of the term Glomar response or Glomarization, for the “neither confirm nor deny” response of the Central Intelligence Agency to requests for information.

Almost 50 years after this event, the story reached the full circle. Attempts to excavate manganese nodules―for real this time―are becoming more and more frequent. The UN’s International Seabed Authority, which has been discussing the subject since 1967, is now fully involved in legal issues concerning the distribution of the ocean mineral, its use and its potential for the future of mankind. They have determined that there are 29 exploration areas which are licensed for mineral prospecting in the period of the next 15 years.

This huge ocean surface stretches over an astonishing 500,000 square miles in the Pacific, the Atlantic, and the Indian Ocean. More than 19 countries are already involved in investigating and determining the possibilities of mining manganese nodules all around the globe. With today’s technology, that might not be out of reach. Time will tell, as it already told us how an espionage cover story can become the foundation of future research that could very much influence our future in the times of resource depletion.