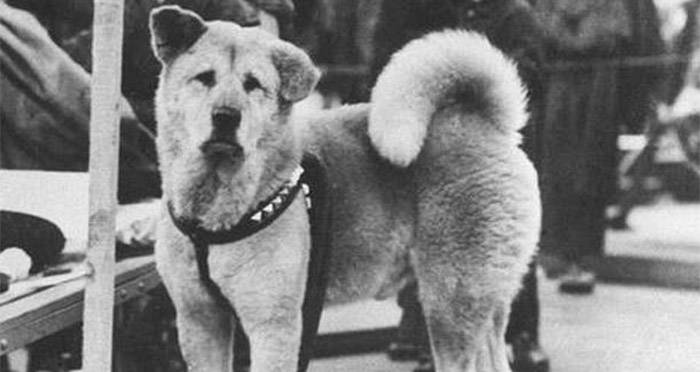 On March 8, 1935, Hachi died at the foot of his statue, still waiting for his master to come home. He was cremated and reunited with Professor Ueno in death when he was buried next to the professor’s grave.

During the second world war, Hachiko’s statue was removed, along with all the other bronze statues in Japan, and melted down so the metal could be used in the war effort.

Professor Eizaburo Ueno lived in the Shibuya neighborhood of Tokyo and taught at the city’s Imperial University during the early 1920s. He followed the same routine every day: in the morning he would walk to the Shibuya Station with his Akita Hachiko and take the train to work.

After he had finished the day’s classes, he would take the train back and return to the station at 3 PM on the dot, when Hachiko would be waiting to accompany him on the walk home.

Master and pet kept this schedule religiously until one sad day in 1925, Professor Ueno suffered a sudden stroke while teaching and passed away.

Hachiko showed up at 3 p.m. as usual, but his beloved owner never got off the train.

Despite this disruption of his routine, Hachiko returned the next day at the same time, hoping that Ueno would be there to meet him. Of course, the Professor failed to return home once again, but his loyal Akita never gave up hope.

Hachiko was at Shibuya Station the next day at 3 p.m., then the day after, and the day after that. Soon, the lone dog began to draw the attention of other commuters, who would stop to pet and feed him.

Even the station employees would bring treats for the loyal canine and sometimes sit and keep him company. The days turned into weeks, then months, then years, and still Hachiko returned each day to wait.

Eventually, one of Professor Ueno’s former students got wind of Hachiko’s routine, and he took the train to Shibuya himself to see if his professor’s pet would still be waiting.

Hachiko was there as usual, and the student was so intrigued by the story that he published a newspaper article about the Akita that would turn the dog into a national icon.

Soon, people from all over the country were coming to visit Hachiko, who had become a symbol of loyalty and something of good luck charm.

The faithful pet did not let old age or arthritis interrupt his routine, a decade after his master’s death he still returned to the station every day to wait, sometimes accompanied by people who had traveled great distances just to sit with him.

Hachiko’s great vigil finally came to an end in 1935, when he was found dead of natural causes in the streets of Shibuya.

Despite not having seen his master for ten years, the dog had returned to the station without fail every day, never giving up hope that the professor would return.

Hachiko’s death made national headlines. He was cremated with his ashes being placed next to Professor Ueno’s grave so that master and loyal dog were finally reunited.

His fur, however, was preserved, stuffed, and mounted and can now be visited at the National Science Museum of Japan in Ueno, Tokyo.

The dog had become so beloved in Japan that donations were made to erect a bronze statue of him in the exact spot he had faithfully waited for over a decade.

The nation would soon be consumed by war; when statues all over the country were being melted down in the desperation for ammunition, Hachiko’s was not spared.

However, the story of the loyal dog was so loved that a new statue was erected at Shibuya Station in 1948, where it remains to this day, still a popular meeting spot for people in the city.