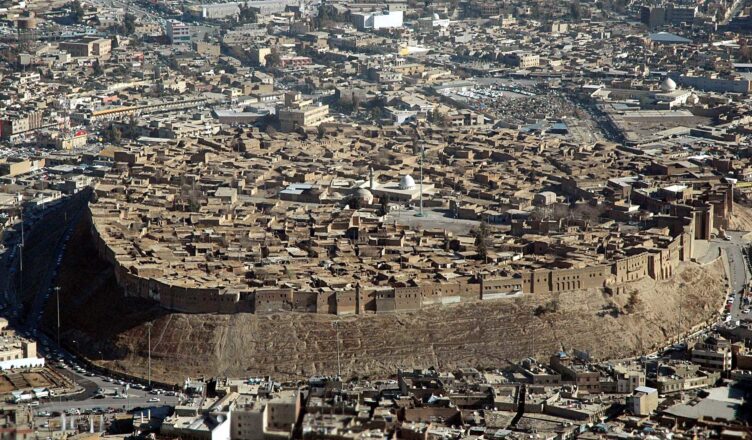 Erbil: One of the oldest towns in the world

Erbil, called Hewlêr, is the capital and largest town in the Kurdish region of Iraqi Kurdistan, and is the third largest city in Iraq. It is located 88 km east of Mosul and has an approximately 1,5 million population.

Spared many of the violence that afflicted Iraq during the first decade of the 21st century, Erbil is a lively and modern town that boasts its new shopping centres, five – star hotels, and sky graters, revelling the possibly slightly optimistic ‘ Second Dubai ‘ label.

Just like that in the Middle East, the new prosperity of Erbil comes largely from hydrocarbons – but its center and its surroundings is dominated by its ancient Citadel that was designated a UNESCO World Heritage Site in  2014.

The urban life of Erbil can be at least 6,000 BC, making it one of the world’s oldest continually inhabited cities. But an archaeological investigation has been carried forward and Stone Age flint tools, which date back about 150,000 years to the Middle Palaeolithic, the oldest of its kind in the world, have been unearthed.

This longevity is possibly due to the abundance of ground water, which helped to maintain the quality of the nearby wheat fields.

Erbil is mentioned on Sumanian tablets written about 2,500 BC, in the area of Mesopotamia, often known as the cradle of civilization, but was prominent as a urban center around the 8th century BC, when it was the most powerful state in the world and part of the Assyrian empire.

Before the rise of Islam and then during Islamic rule in the 7th century, Erbil was an important centre for Christianity. It was captured by the Mongols in 1258 after a six-month long siege and fell into decline as an important regional centre.

Geologically, Erbil is located on a vast plain between two longitudinal folds within the Tertiary Folded Belt. The plain is covered by basal Pleistocene detritus, primarily polygenetic synclinal fill deposits, consisting of a heterogeneous collection of sediments including debris flow and braided river deposits, reaching a thickness of over 120m. In the centre of that plain lies an almost circular hill, on the top of which is Erbil Citadel, the historic city centre of Erbil.

The hill is about 30m high, with slopes at an angle of about 45°, and is usually described as a tell or occupied mound of manmade origin, but it is actually composed of stacked polygenetic synclinal fill deposits. It is the result of vertical uplift and erosion, followed by  human activity over many millennia, which eventually carved away the soft sediment surrounding the more consolidated material of the core.

Successive building throughout human history means that the Citadel is now a magnificent feature that dominates the city of Erbil, the continuous wall of tall 19th-century façades still conveying the visual impression of an impregnable fortress.

These are not, however, fortified walls, but a ring of houses built on the edge of the mound and held in place by a series of buttresses. Although Erbil boasts such a long history of human habitation, the oldest house in the Citadel can only be dated back to 1893.

The Citadel is roughly oval in shape, covering an area roughly 430m by 340m (102,000m2), with three ramps leading up to gates in the outer ring of houses. An inventory made in 1920 identified 506 housing plots in the Citadel, divided east to west into three districts: one for high class families, one for craftsmen and farmers, and one for ‘dervishes’ – Sufi Muslim aesthetes or monks.

There were also mosques, schools, a hammam or bath house and, up to the 1950s, a synagogue. Until the opening-up of a main north–south thoroughfare in 1960, the streets on the Citadel mound radiated outward from the southern gate in a fan-like pattern believed to date back to Erbil’s late Ottoman phase.

A lower town had gradually been developing at the foot of the mound, becoming by the middle of the 20th century a more attractive location to live in than the Citadel, so the number of inhabitants living on the mound gradually declined.

By 1995 there were only 1,631 inhabitants living in 247 houses left. Finally, in 2007, all bar one of the remaining families in the Citadel were evicted (with compensation) as part of a large project to restore and preserve its historic character; just one family remained, so there would be no break in the millennia-long history of continuous human habitation.

Since 2007 the KRG and UNESCO are working together to preserve and restore the Citadel buildings, most of which are in a poor state, having been predominantly built from mud. Eventually, the hope is to have families living back in the Citadel, making it a thriving metropolitan centre again.

Exploration for hydrocarbons in the Kurdistan region of Iraq has been underway since the mid 1920s (see GEO ExPro, Vol. 11, No. 2 Memories of Iraqui Kurdistan), but operations in the area were frequently difficult and dangerous, in part because of periodic uprisings of Kurds seeking independence from Baghdad.

The Iraq Petroleum Company controlled all exploration in the country, including Kurdistan, until  1972, when it was nationalised by the Iraqi government.

In 2003, the fall of Saddam Hussein opened up semi-autonomous Kurdistan to foreign investment, and serious and independent oil exploration started soon after, initiated by the Kurdistan Regional Government (KRG), which is represented by the Ministry of Natural Resources and is based in Erbil.