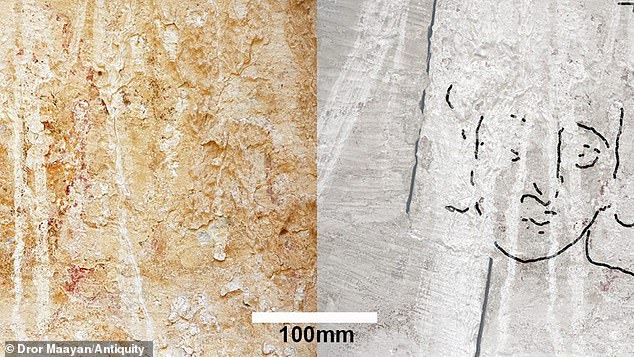 Archeologists have recently identified what is believed to be an extremely rare painting of Jesus Christ in an abandoned ruins church in the Israeli desert.

According to specialists, the painting is believed to date back at least 1,500 years.

The Picture previously considered an unknown piece of art was spotted at an ancient Byzantine Church in the Negev Desert.

The painting could date back to the 6th century and scholars argue the piece of art reveals Jesus Christ’s facial outline, revealing him as a young man with short hair.

The portrait, first spotted in the 1090s has now been studied using state-of-the-art techniques, which helped specialists to conclude it was a rare piece of art.

The rare painting was Found in the archeological ruins of Shivta, believed to be an old farming village and located in the Negev desert, some 25 miles (40 kilometers) southwest of Be’er Sheva, the largest city in the Negev desert of southerm Israel.

Shivta is thought to have been founded during the 2nd century and flourished for more than 6 centuries after it was eventually abandoned during the early Islamic period.

The results of the discovery were published in a daily paper in the journal Antiquity, where experts say that the mere presence of Jesus Christ is important by itself.

“Christ’s face in this painting is an important discovery in itself,” the researchers wrote in the paper.

“It belongs to the iconographic scheme of a short-haired Jesus Christ, which was especially widespread in Egypt and Syria-Palestine, but gone from later Byzantine art.”

The discovery is of great importance mostly because of the fact that the painting of Christ predates the typical religious iconography used in the Orthodox Christian Church.

“Thus far, it is the only in situ baptism-of-Christ scene to date confidently to the pre-iconoclastic Holy Land.

The recent discovery is just one of the many Interesting finds that have recently been made in Isreal.

Furthermore, in February of 2018, archaeologists Found a clay seal mark that is though to bear the signature of Biblical Prophet Isaiah.