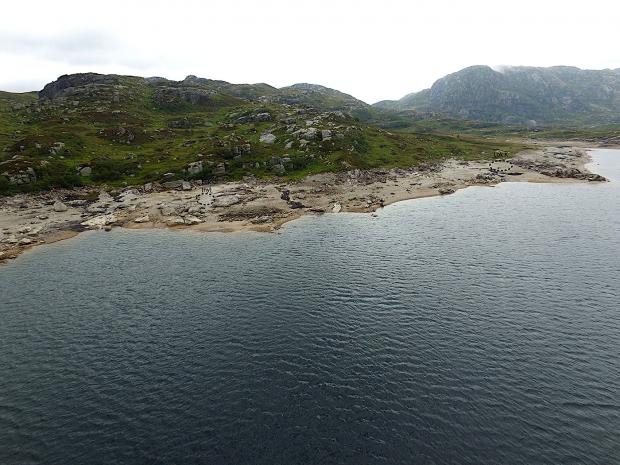 A new stone age dwelling at Store Myrvatn, a lake on a mountain plateau southeast of Hunnedalen in Norway is discovered by archaeologist’s from the Museum of Archaeology, University of Stavanger.

“The settlement consists of a tent ring, a circle of stones which would have been laid around the tent to keep the canvas in place. We also discovered some tools together with the stones. These included a flint blade, which is a variety of knife, and other tools,” says Krister Eilertsen, project manager and archaeologist.

He and 5 colleagues from the museum made the new discoveries over three days last summer. The water level at the lake was very low due to a long period of drought, so they were able to investigate area’s that are normally submerged by water.

Well preserved by the marsh

What was found is probably many 1000’s of years old. Archaeologists undertook excavations at Store Myrvatn in both the 1980s and 1990s, and some of the oldest stone-age settlements in the country’s mountain regions have been found at this very site.

“We already knew of the other stone age settlements around the same lake, and we have previously found arrowheads, scrapers and knives here. Archaeologists have also discovered fragments of burned bones, but we did not find any this time,” Eilertsen says.

The oldest traces of people discovered here are as old as 10,000 years. Previous finds at Store Myrvatn have provided scientists with some of the earliest C14 dating in the country. C14 is a method used to determine the age of organic material.

“This has led to exceptionally good conditions for conservation at several of the stone age settlements, where artifacts, tent rings, and fireplaces have been left untouched,” the archaeologist says. “One experience a special feeling when holding a knife that might last have been held by a human more than 10,000 years ago.”

Every year the archaeologists apply for conservation funds from the Directorate for Cultural Heritage, to be able to monitor and secure the prehistoric legacy of Store Myrvatn.

There are several reasons why the site must be secured. The Store Myrvatn lake is regulated for power production, and has been for decade. Thus, the lakes level is not constant. That the lake is regulated means that the settlements are subject to erosion, and that wave activity is wreaking havoc on the peat.

In addition to conserving the settlements identified, the archaeologist’s are aware that new settlements may emerge, just as it did last summer.

The Archaeological Museum will continue the research at this site, and the search for new settlements.

Besides documenting the site with aerial drone photography and many other methods, the archaeologist’s also had to restore an equipment storage shed damaged by severe winter weather.

Now, they are ready for new visits at the lake.

“We discovered fireplaces, stone seals and made several other discoveries. It is exciting that the site continues to deliver amazing results. Hopefully, we will be able to investigate the new settlements during one of the coming seasons. Our fingers are crossed for more great finds,” Eilertsen says.