The new discovery is especially grisly also for anthropologists who are well used to swallowing the remnants of human corpses. Scientists have uncovered what is considered to be the oldest ritual event ever to be found in America.

For a pair of amputated hands positioned over the face opposite sides the 9,000-year-old decapitated skull was unarthed and slash marks suggest the skeleton was detached.  It was found in a cave called Lapa do Santo, in Lagoa Santa, east-central Brazil.

Researchers claim that the beheaded head may provide hints about the history of South American decapitation practices.

The Brazilian Tupinamba were known for collecting heads as war trophies, for example, while the Indians of Arara used heads of defied enemies as instruments of music. Otherwise, human sacrifices were used for the decapitation of the Chmiu culture in Peru.

Analysis of the decapitated skull has revealed that it belonged to a young man who was member of the group of humans who inhabited the cave, rather than a defeated enemy.

The careful positioning of the hands and skull also suggest the dis-embodiment was carried out as a part of a ritual or ceremony. Tiny cut marks on the skull suggest the soft tissue around the skull was additi-onally cut away before it was buried.

However, researchers are baffled about why this beheading took place, although they believe the head may have been removed after the man had died.

Dr André Strauss, the lead author of the study at the Max Planck Institute for Evolutionary Anthropology in Leipzig, Germany, said:’This ritualised decapitation attests to the early sophistication of mortuary rituals among hunter-gatherers in the Americas.

‘Moreover, the finding from Lapa do Santo doubles the chronological depth of the practice of decapitation in South America.

‘Geographically, it expands the known range of decapitation in more than 1,240 miles (2,000km), showing that during the early Holocene this was not a phenomenon restricted to the western part of the continent as previously assumed.’

Previously, the oldest known case of decapitation in South America occurred in the Peruvian Andes, dating to around 3,000 years ago.

The oldest known case in North America was found in Florida and is around 6,990 to 8,120 years old.Lapa do Santo is thought to have been occupied by humans up to 12,000 years ago. Stone tools and animal bones found in the region suggested prehistoric hunter gatherers used the site for some time.

In 2007, anthropologists discovered the disembodied skull and jaw, together with the first six vertebrae of the neck and two severed hands in a pit just below the surface of the cave. They had been covered with limestone slabs, suggesting they had been carefully buried.

Dr Domingo Carlos Salazar-Gárcia,another of the researchers involved in the study at the Max Planck Instiute for Evolutionary Anthropology, said the decapitation appears not to have been a violent act.

‘The chemical analysis of strontium isotopes done in this study indi-cates that the decapitated individual was not an outsider to the group’ he said.

‘Therefore, it was probably not a defeated enemy but instead a mem-ber of the community’. The way the remains had been arranged con-trasts dramatically with other burials discovered in the Lagoa Santa area, which have been relatively simple.

Writing in the journal Public Library of Science One, the researchers said the discovery suggests these early human inhabitants of South America had quite complex burial rituals.

They said: ‘At Lapa do Santo, neither drill holes nor an enlargement of the foramen magnum were observed in the skull, making it unlikely that this was a trophy head.

‘The ritualised decapitation of Burial 26 was not a violent act against the enemy but instead part of a broader set of mortuary rituals involv-ing a strong component of manipulation of the body.

‘The careful arrangement of the hands over the face is compatible with an important public display component in the ritual that could have worked to enhance social cohesion within the community. 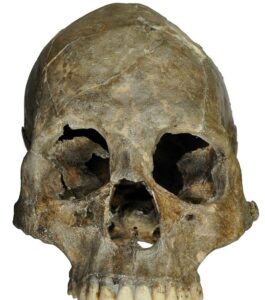 ‘In the apparent absence of wealth goods or elaborate architecture, Lagoa Santa’s inhabitants seemed to be using the human body to reify and express their cosmological principles concerning death.’