A Swiss farmer found in his cherry orchard something extraordinary as he spotted it shimmering in the molehill and then a trove of 4,166 Roman bronze and silver coins.

The hoard has been described as one of the biggest treasures ever found in Switzerland.

In a short distance from an old Roman village, in the closeby city of Frick, Agence France Press notes that this discovery took place in Ueken, in the north canton of Aargau in Switzerland.

The Swiss farmer asked the regional archeological office for the excavation of all the coins, some of which were hidden in small pouches of leather, for several months.

In total, the trove weighs an incredible 15kg (33lb) and consists of ancient Roman coins stretching from the reign of Emperor Aurelian (270 – 275 AD), known for restoring the Empire’s eastern provinces after his conquest of the Palmyrene Empire, to the reign of Maximian (286 – 305 AD),

who carried out campaigns to relieve the Rhine provinces from the threat of Germanic invasion.  The most recent coin discovered in the hoard dates to 294 AD.

“As an archaeologist one rarely experiences something like this more than once in your career,” Swiss archaeologist Georg Matter told Spie-gel Online .

The coins are in excellent condition with the prints still legible, leading experts to suspect that the coins were taken out of circulation shortly after they were minted, but retained for the value of the bronze and silver. 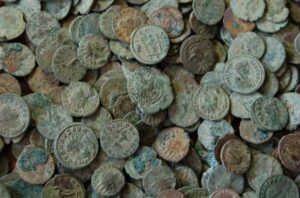 The region in which the coins were found has a long history, and is believed to have been the location of a large Roman settlement between the 1 st and 4 th century AD.

Remains of a 2 nd century Roman estate have been found along the main road in the town of Frick, and a 4 th century fort was discovered below the church hill.

The Roman era name for Frick (Latin: Ferraricia) refers to a Roman iron ore mine in the area.

The farmer who discovered the treasure will receive a finder’s fee, but according to Swiss law, the coins will remain public property and are set to go on display at the Vindonissa de Brugg Museum in Aargau.