The Italian Archaeologists announced the discovery, in the area between Rome and Ostia Antica, on of the ancient stone pool dating back to the fourth century BC to the southwest of the city.

During preventive archaeological digs on the site of a future residential and commercial complex development, a 48 meters (157 ft ) long and 12 metres (39 ft) wide huge sunken pool has been uncovered. 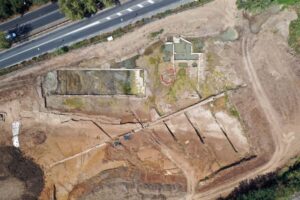 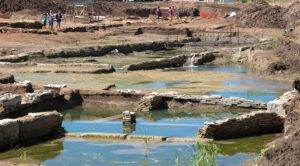 Its function is unclear. The most plausible current hypothesis is that the monumental pool was part of a system of water management, a large reservoir or settling tank. It could also have had an agricultural purpose — an ancient hydroponics farm.

Then there’s always the old fallback of unknown ritual purpose. The outer walls were made of tufa blocks and an inclined ramp connects the pool to the street level of the time. This was not a Roman-style public bathing facility or anything else familiar on the archaeological record.

The two-hectare site is replete with layers of building and structures and artifacts that have been discovered range over eight centuries starting in the 5th century B.C.

At the time the pool was built, the area was already an important crossroads connecting the city of Rome and its first colony, Ostia, which according to legend was founded by Ancus Marcius, fourth king of Rome, in the 7th century B.C.

The artifacts recovered may provide additional clues to the usage of the pool and other structures over different historical phases. 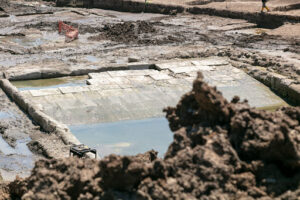 One of the remains found may be of particular import: it’s a wooden fragment, preserved in the watery bottom of the pool, inscribed in Etruscan. At the time, the Etruscan language was used by Latin communities as well, including Rome. 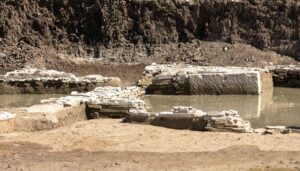 “The excavation, in all its grandeur, reveals an important place” – explains superintendency archaeologist Barbara Rossi – “which lasted for over eight centuries, as demonstrated by the quantity and above all the quality of rediscovered structures, such as the monumental basin from the fourth century BC, found in all its expanse.”

“An in-depth study of the large number of materials that this investigation has returned to us and continues to return to us – wood, terracotta, metal objects, inscriptions – will reveal the secrets of this extraordinary corner of the greater Rome area.”