Many people consider ancient Egyptian dynasties to be reasonably well-documented, but there were many kings whose lives and deeds have been lost to the sands of time. King KhaBa of the Old Kingdom’s Third Dynasty, which ruled from 2650 to 2575 BC, was one of them.

KhaBa’s name, which means “The Soul Appears” or “Radiant Soul,” is recorded, but little else is known about him, as it is with so many kings. 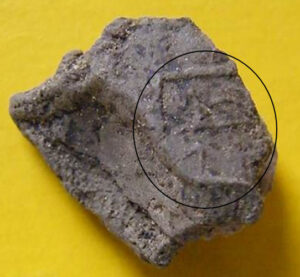 That could soon change, as a tomb of KhaBa has been discovered in the Quesna archaeological site in the Nile Delta. It is the first tomb from this time period to be found.

The mud-brick monument was found in Quesna in 2010, but the archaeological team did not return until last year to perform further research.

A press release from the Ministry of Antiquities reports that: “excavations revealed the tomb to be 14.1 m long north-south, by 6.0 m wide east-west, with a corridor chapel 3.0 m wide nearly running the length of its east side.

It is a tripartite tomb, with the southern section having a rubble fill representing the primordial mound of creation, the northern section containing the burial shaft and the serdab, with the central section holding the double burial chamber.”

The most significant finding was made just a few days ago when the research team found a remarkable artefact in one of the burial niches – a seal impression bearing the name of King Khaba.

“The discovery of this tomb is a great achievement. We still do not know much about this king and his dynasty, much study and research much be done to unveil its history,” said Mamdouh al-Damaty , on April 20, 2015.

Al-Damaty said KhaBa probably ruled around 2670 BC. He is one of the earliest kings of the Old Kingdom. The Tour Egypt website says KhaBa may have been one of the names of Huni, who was king later in the Third Dynasty. Another king of the Third Dynasty, Djoser, has more fame and a more spectacular pyramid (see below).

“We know very little about the king, who probably occupied the throne of Egypt near the end of the 3rd Dynasty, named Khaba,” says TourEgypt.net. … “His nswt-bity [kingly] and nbty [heraldic goddess] names are unknown. It has been suggested that the king’s birth name might have been Teti. In the Turnin King List, this king’s name is marked as ‘erased,’ but is credited with a reign of six years.

The fact that his name was marked as ‘erased’ may mean that there were dynastic problems, or simply that the scribe who composed the Turin King List was unable to read his name from more ancient records.”

KhaBa predates the time when the term pharaoh was applied to Egyptian kings.

Prior to the recent find at Quesna by National Geographic and Egypt’s Ministry of Antiquities, KhaBa had been known from archaeological evidence at four or five sites, including a mastaba, or early type of pyramid, at Zawiyet al-Aryan where eight alabaster bowls with his serekh were found. A serekh is like a seal that indicates a king’s name.

However, this is the first tomb excavated in more than a century that can be attributed to the reign of King Khaba.

The most famous Third Dynasty king was Netjerykhet, who is said to have founded a new epoch in ancient Egypt.

“Also known as Djoser, he ruled for almost two decades and is accredited with building the Step Pyramid at Saqqara,” says Tour Egypt. “The king’s vizier, Imhotep, was the architect of that great tomb, and of the magnificent Funerary Complex of Djoser at Saqqara.

Egypt experienced a seven-year famine during Djoser’s reign, so he sought the counsel of Imhotep and one of his governors, Medir, and agreed to travel to Elephantine at Aswan.

Once there he erected a temple to the god Khnum, who was said to control the flow of the Nile. The famine ended, miraculously enough, and people believed it was due to this act of faith.”