A 2000-year-old story of fear and devastation has been brought to light during renovation work at an English department store, which uncovered a series of Roman artifacts and  human remains of people who were slaughtered at the site.

The jewelry had been undisturbed since 61 A.D. in Colchester, some 50 miles northeast of London. It was found in a wooden box and bags under a department store in the town’s high street.

A cache of blingy gold and silver jewelry hidden by a wealthy Roman woman nearly two millennia ago was unearthed recently during a department store site excavation in the historic British town of Colchester.

The treasure, which has been dated to the year 61AD, provides examples of what the best-dressed women of the day were wearing.

Experts from the Colchester Archaeological Trust surmised that the wealthy Roman woman hastily buried her valuables on the floor of her home due to a feared invasion by native Britons.

The military campaign, which ultimately failed to wrest control from the Romans, was to be known as the Boudican Revolt.

Physical evidence, including scorched food items and broken human bones, tells a harrowing story of a home that was burnt to the ground during the violent rebellion.

The treasure, which the Colchester Archaeological Trust is calling the finest discovery of Roman jewelry in British history, would have been lost forever had it not been for excavation work related to the $48 million expansion of the upscale Colchester department store, Williams & Griffin.

The store offers everything from furniture to fashion (Yes, they sell fine jewelry) and is located about 65 miles northeast of London. 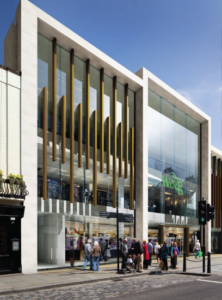 “We have been working on the site for six months, and this remarkable Roman jewelry collection was discovered on the third to last day of our dig,” Colchester Archaeological Trust director Philip Crummy told the East Anglian Daily Times.

According to NBC News, the department store’s owner, Fenwick Ltd., is planning to donate the Roman hoard (now called the “Fenwick Treasure”) to the local Colchester Castle Museum. Colchester has the distinction of being the oldest town in Britain.