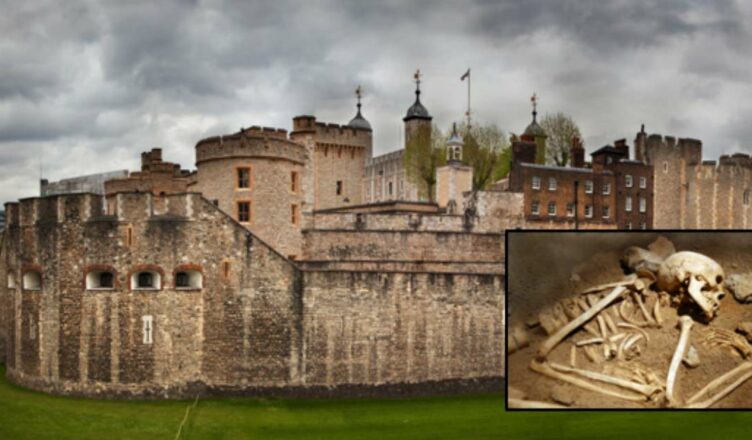 Skeletons of Woman and Child Found Beneath Tower Of London

The St. Peter’s ad Vincula Chapel has been a spiritual haven in the Tower of London since the 16th century, the tomb of some of the most prominent prisoners of the tower, including Henry VIII’s ill-fated second and fifth wives Anne Boleyn and Catherine Howard.

But for much of its 950-year history, the tower was also a thriving palace and community center.

Within the medieval castle’s walls were chapels, pubs, government offices and residences for the hundreds of Londoners who kept the place running.

And as the first new skeletal discovery in nearly 50 years reminds us, not all who were buried there were ministered by the headsman’s ax.

Two intact skeletons — one of a woman who died at approximately 40 years old and one of a 7-year-old girl — were recently exhumed from connected burial plots below the tower’s Chapel of St. Peter ad Vincula.

This in-depth look at the departed duo revealed that both adult and child lived the uncomfortable lives of the laboring class.

According to Alfred Hawkins, a curator at Historic Royal Palaces (the nonprofit that cares for the tower), the find suggests that the Tower of London was not only a place where traitors and nobles were laid to rest but was also a burial site for the many common folks who lived and worked there.

“As the first complete remains to be examined from within this royal fortress, they have offered us a chance to glimpse that human element of the tower, which is so easy to miss,” Hawkins said in a statement.

“This fortress has been occupied for almost 1,000 years, but we must remember it was not only a palace, fortress, and prison but that it has also been a home to those who worked within its walls.”

Hawkins and his colleagues discovered the skeletons while conducting an archaeological survey to make the Chapel of St. Peter ad Vincula more wheelchair-accessible.

Just outside the chapel’s main entrance, the researchers discovered the remains of what appeared to be an even older chapel, including a medieval floor. Cut into the floor were two burials, arranged side by side.

The two skeletons were found lying on their backs with their feet facing east, typical of Christian burial, the curators said.

These customs were typical of the late medieval and early Tudor periods, suggesting that the skeletons were interred between 1450 and 1550, sometime between the War of the Roses and the reign of Edward VI (Henry VIII’s son).

An analysis of the bones revealed that both showed signs of illness at death and that the older woman likely had chronic back pain.

There were no signs of violent death (i.e., no ax marks in the cervical region). All the clues pointed to two castle residents — neither royals nor prisoners — who lived, worked and eventually died at the tower before being respectfully buried there.

The skeletons have now been reinterred in the chapel during a special ceremony conducted by the Tower of London chaplain, the curators said. May they rest (again) in peace.