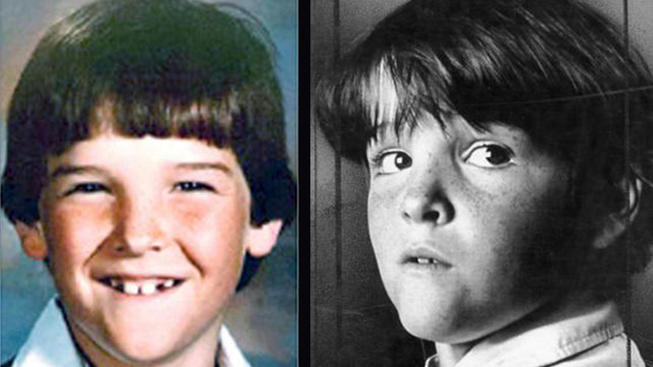 When it comes to hunting for kidnapped children and conjuring worst-case fates for any boy or girl playing outdoors alone, there is a clearly defined moment in history when everything changed.

That moment came exactly 35 years ago Sunday, on Feb. 10, 1984 – the day 10-year-old Kevin Collins vanished off a San Francisco street.

Police in San Francisco has swarmed a home in hopes of solving one of the Bay Area’s most puzzling missing child cases.

The discovery of bones at the location in San Francisco’s Haight neighborhood could signal a break in the case of 10-year-old Kevin Collins, who vanished without a trace in February 1984.

Officers were reportedly joined by the FBI agents as they searched a home near the corner of Masonic Ave. and Page Street.

The home is located about a block away from the bus stop where Kevin disappeared.

ABC 7 reported that police showed up at the home in the afternoon and began digging in the backyard and in the basement after a cadaver dog indicated human remains were present.

Later, some bones were taken away from the home.

But officers conceded that the remains could be that of an animal and not a human, according to ABC 7.

Reports said that a man who used to live in the home was a suspect in Kevin’s disappearance, and has since died.

The name of that suspect was not released.

The boy’s parents held on to hope for years that he would be found alive, but they now believe Kevin to be dead.

His heartbroken father David, who closed a center established to aid in the search in 1996, told the San Francisco Chronicle at the time: ‘He’s deceased. If he could have, he would have come back to us.’

Kevin’s mother, Ann Collins, told KTVU that she was notified by police about the development in her son’s case.

She confirmed to the station that something was found at the scene that was transported to the California state crime lab.

The fourth-grader was on his way home from basketball practice on February 10 when he went missing. He was last seen at a bus stop on that evening, petting a black dog.

The family received hundreds of calls in the days following his disappearance, but nothing that turned up any trace of the boy.

Following his disappearance, a local search that included the plastering of his photograph on posters throughout the city and became one of the most notable missing child cases in U.S. history.

His photograph was on the cover of Newsweek in 1984.