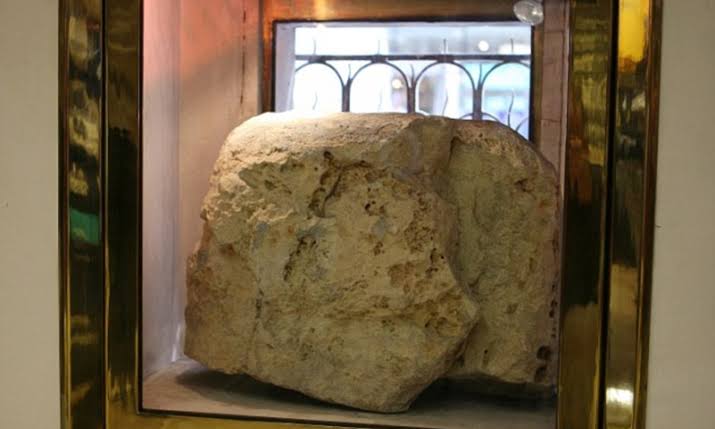 The Forgotten History of the London Stone, an Artifact Linked to Aeneas, King Arthur, and John Dee

London Stone is a historic landmark housed at 111 Cannon Street in the City of London. It is an irregular block of oolitic limestone measuring 53 × 43 × 30 cm (21 × 17 × 12″), the remnant of a once much larger object that had stood for many centuries on the south side of the street.

The name “London Stone” was first recorded around the year 1100. The date and original purpose of the Stone are unknown, although it is possibly of Roman origin, and there has been interesting and speculation about it since at least the 16th century.

There are modern claims that it was formerly an object of veneration, or has some occult significance. These assertions, however, are completely unsubstantiated.

Still, the Romans were not the only ones who used this stone, as it was also utilized in the city during the Saxon and Medieval periods as well.

The location of the London Stone has led to one speculation that it was once part of a monument erected in the forecourt of a palace. The London Stone is found towards the southern end of the medieval Candlewick Street (which is known today as Cannon Street), and opposite St. Swithin’s Church.

This would place it in front of a Roman building commonly identified as the provincial governor’s palace. Thus, the London Stone may have been part of a monument that once stood in the forecourt of this palace.

However, there are those who have suggested that the London Stone predates the arrival of the Romans. One of the most well-known of these speculations was made by the 18th / 19th century English poet and painter, William Blake.

According to Blake, the London Stone was used as an altar by the ancient Druids to sacrifice their victims. A similar assumption can be found in an updated version of John Stow’s 1598 The Survey of London .

The historian John Strype, who updated this piece of work during the 18th century, entertained the possibility that the London Stone was used during ancient pagan worship.

The London Stone is sometimes called the Brutus Stone, and is said to be a link between Britain and Troy. According to one legend, London was founded by a man by the name of Brutus of Troy, a descendant of the hero Aeneas.

This legend is said to have its origins in Geoffrey of Monmouth’s 12th century History of the Kings of Britain . The connection between the London Stone and Brutus, however, can only be traced back to the 19th century for certain. In 1862, an ‘ancient saying’ appeared in an article in the periodical Notes and Queries .

This saying claimed that “So long as the Stone of Brutus is safe, so long will London flourish”. The article further claimed that the stone was brought from Troy, and was originally erected as an altar in the temple of Diana. It seems that, apart from the author of the said article, no one else knew about this legend.

Without any definite answer as to the original function of the London Stone, it is likely that this issue will continue to be speculated on. One of the seemingly newer legends surrounding the London Stone is that this was the stone from which King Arthur pulled out Excalibur (assuming that Excalibur and the Sword in the Stone are one and the same).

Another modern legend asserts that John Dee, an adviser of Queen Elizabeth I, believed that the London Stone had magical powers.

If the London Stone was indeed an important object, it does not seem so today. About 10 years ago, it was displayed in a curbside cage that was stuck on the wall of a Sportec sports shop (111 Cannon Street, London, EC4N 5AR).

Surrounded by modern sports equipment, the London Stone must have presented a strange site to visitors. The sports shop was later replaced by a WH Smith, though the stone was left in place.

It has been reported that permission for the demolition of this building has been granted, and “a specially raised plinth so that the artifact can be viewed by the public” will be included when the new premises are built. In the meantime, the stone will be displayed in the Museum of London during the construction period.