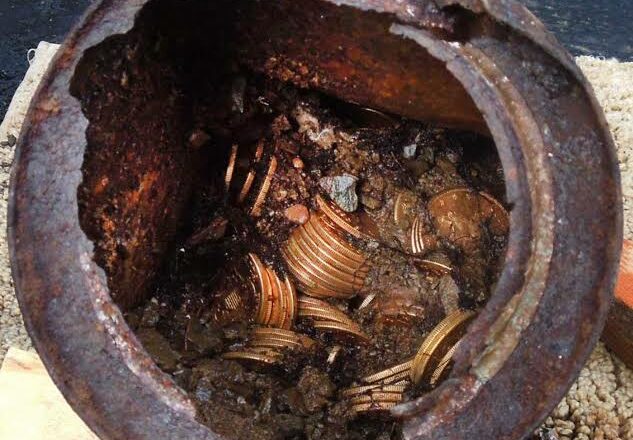 A Northern California couple found $10 million worth of rare coins dating back to the 1800’s San Francisco Mint Coin.

A box with rare gold coins discovered by a couple of Californians walking their dog that goes on sale with a $15,000 coin. Coins were priced at $11 million and were dated from 1847 to 1894.

Don Kagin, whose firm is handling the sale, says most of the remaining 1,400 coins had gone on sale on Amazon.com and Kagins.com after the auction.

The couple, whom Kagin declined to identify, found them last year buried under the shadow of a tree on their rural Northern California property.

Here are five things to know about the coins and their origin:

Why are they so Valuable?

Experts say paper money was illegal in California until the 1870s, so it’s extremely rare to find any coins from before that period.

Additionally, most of the coins are in mint condition, having been stashed away seemingly immediately after they were minted. They were valued by Don Kagin, a numismatist who is handling the sale and marketing of the coins.

Kagin says the couple — a middle-aged husband and wife — does not want to be identified in part to avoid a gold rush on their rural Northern California property by modern-day prospectors.

They discovered the coins in eight cans buried in the shadow of an old tree on the property.

They plan to keep a few of the coins themselves and use the money from the rest to pay off bills and donate to local charities. Money from Tuesday’s auction will benefit the effort to turn the Old Mint into a museum.

Where did the coins Come From?

Most of the coins were minted at the San Francisco Mint, according to Kagin. It’s not clear, however, who put them in the ground or how they were obtained, though theories have abounded.

Kagin says people have linked the coins to stagecoach bandit Black Bart, outlaw Jesse James and theft at the San Francisco Mint, but none of the theories has panned out.

What is in the Collection?

How Does this Discovery Compare to Other Coin Find?

Kagin calls this coin to find the largest such discovery in U.S. history. One of the largest previous finds of gold coins was uncovered by construction workers in Jackson, Tennessee, in 1985 and valued at $1 million.

Gold coins and ingots said to be worth as much as $130 million were recovered in the 1980s from the wreck of the SS Central America.

But historians knew roughly where that gold was because the ship went down off the coast of North Carolina during a hurricane in 1857.