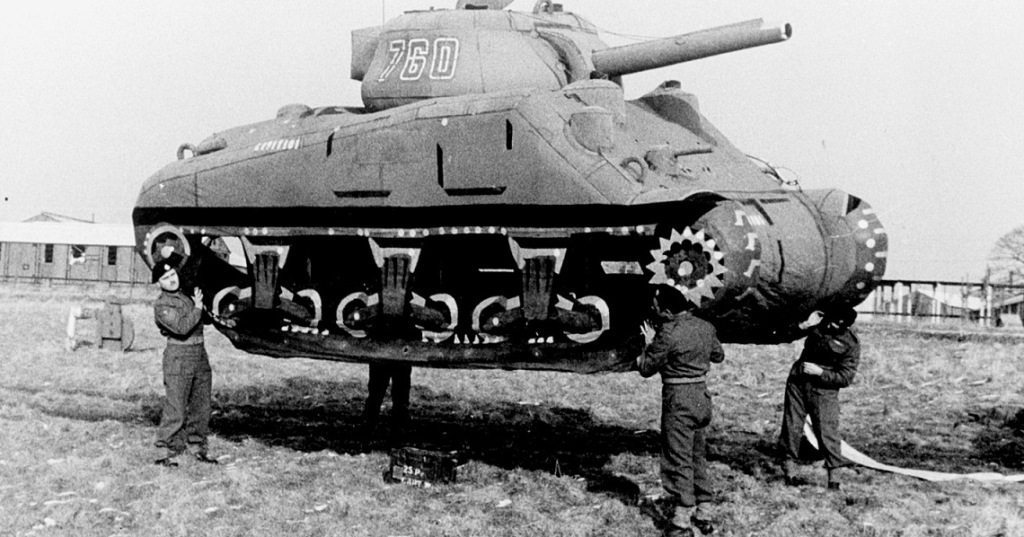 Remembering The Ghost Army that Saved US Lives in WW II

Bill Blass was one of them. So was Ellsworth Kelly. And Arthur Singer. And Art Kane. Before these men embarked on the artistic careers they would become known for, they served together during World War II.

Because their job was to fool Hitler.

Blass and his cohort were members of the 23rd Headquarters Special Troops, an elite force whose specialty was “tactical deception.” They’re now better known, though, as the “Ghost Army” — a troop of soldiers that doubled, in Europe’s theater, as a troupe of actors. (The unit was the brainchild, one report has it, of Douglas Fairbanks, Jr.) The 23rd were, essentially, the Trojan Horse builders of World War II.

Except that their wooden horses took the form of inflatable tanks. And rubber airplanes. And elaborate costumes. And radio codes. And speakers that blared pre-recorded soundtracks into the forests of France.

The Ghost Army, some 1,100 men in all, ended upstaging more than twenty battlefield deceptions between 1944 and 1945, starting in Normandy two weeks after D-Day and ending in the Rhine River Valley.

Many of those performances — “illusions,” the men appropriately preferred to call them — took place within a few hundred yards of the front lines.

And they relied on what the Ghost Army termed, awesomely, “atmosphere” — creating the overall impression of an omnipresent military force. Soldiers in the Ghost Army were Potemkin villages, personified.

They pretended to be members of fellow units (units that were actually deployed elsewhere) by sewing divisional patches onto their uniforms and painting other units’ insignias onto their vehicles.

The Army would dispatch a few of its members to drive canvas-covered trucks — sometimes as few as two of those trucks — in looping convoys that would create the impression (sorry, the “illusion”) of an entire infantry unit being transported.

As Jack Masey, who was recruited into the Ghost Army at age 18, remembered: “We were told we were going to be using inflatable equipment to try and fool the Germans into thinking that we were a real army when we were in effect, I suppose, a rubber army.”

The rubber army used its dramatic streak to its advantage. It staged a series of, basically, “traveling shows”: elaborate plays designed to intimidate and/or confuse the Axis. Its members put their theatrical skills to use, engaging in “playacting,” designing “soundscapes,” and creating “set-dressing.”

They were dispatched to spend time at French cafes near the war’s front to spread gossip among the spies who might be there — to, as one Ghoster put it, “order some omelets and talk loose.” Some actors in the Ghost Army would also play the parts of Allied generals, dressing up as the officers and visiting towns where enemy spies would be likely to see them.

The Ghosters’ role was, in some sense, to cause chaos and confusion. And they played it not just with the help of visual trickery, but also with what they called “sonic deception.”

With help from engineers at Bell Labs, a team from the unit’s 3132 Signal Service Company Special traveled to Fort Knox to record sounds of armored and infantry units onto wire recorders (the predecessors to tape recorders) that were cutting-edge at the time. In the theater, they then “mixed” those sounds to match the atmosphere they wanted to create, playing their faux soundtracks with powerful amplifiers and speakers that were mounted on half-tracks — a combination so effective that the sounds could be heard up to 15 miles away.

The unit’s Signal Company Special also created what it called “Spoof Radio,” in which its actors impersonated the radio operators from real units.

The Ghosters mimicked, as well, departing operators’ idiosyncratic methods of sending Morse Code — creating the illusion, for Axis armies, that the Allied unit was in the vicinity when in fact it had already departed the area.

The Ghost Army’s sonic illusions, in this case, were so convincing that they fooled Axis Sally, the radio propagandist, into reporting that an entire Allied division was preparing for battle in a spot that actually contained, at the time, no troops at all.

All of which went to serve the Allies’ ultimate illusion: that their military force was bigger and more powerful than it actually was. (Part of the effectiveness of the Ghost Army came from the fact that it would employ real tanks and artillery pieces along with the fake ones, to make the dummies in the distance seem to blend in with the others.) The Ghost Army, today, is estimated to have saved tens of thousands of soldiers’ lives with its deceptions, and to have been instrumental in several Allied victories in Europe. It accomplished all that by, among much else, taking “the art of war” wonderfully literally.