In the sacred valley south of the Royal Cemetery of Umm Al Qaab, the Egyptian team of archeologists had discovered some unusual rock openings high in the wall.

Some openings lead to one chamber and others to teams of two, three and five rooms, once of sacred religious importance. Neverthe-less, pottery was possibly used during the Ptolemaic period, 304-30 BC,according to Mostafa Waziri of Egypt’s Supreme Council of Antiquities. 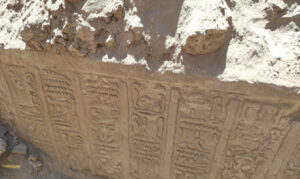 The groups are bound by small doors cut into the rock wall. The rooms are rarely more than 1.20 meters wide and undecorated, but the rest have cut-rock features such as deep niches, sides of benches, shallow depressions and floor troughs and several narrow walls openings just below the ceiling.

Some of the chambers are enlargements of natural tunnels in the bedrock created by water flowing over thousands of years. The cliff chambers are cut above deep vertical well-like shafts that follow natural water tunnels down into the bedrock, but these are now blocked by debris.

There have been found ropes or grab handles next to most of the rock openings, said Waziri, adding that the chambers do not appear to have been used as tombs.

Material evidence for the function of the complex is barely sufficient. There is only a single graffiti in one of the chambers gives the names of one Khuusu-n-Hor, his mother Amenirdis, and grandmother Nes-Hor. These names, as well as the pottery found in and around the chambers, suggests that the complex probably dates to the Ptolemaic period, 332-30 BC.

The only carved decoration consists of two small but unusual figures cut in bas relief on the side of one entry point.

One graffito naming Khuusu-n-Hor, his mother Amenirdis, and grand-mother Nes-Hor, was found in one chamber, and a single carving depicting two small figures was found near one of the entrances.

The excavations in the area will be continued. 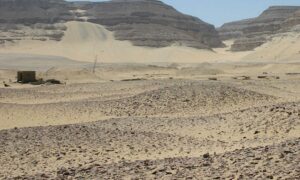 Umm Al-Qaab was a necropolis of the Early Dynastic Period kings at Abydos, Egypt, and a place of veneration and worship in ancient Egypt. Later, by the time of the Middle Kingdom, at least one of the royal tombs was excavated and rebuilt for the priests of Osiris.

Human sacrifice was practiced as part of the funerary rituals associa-ted with the first dynasty. The tomb of Djer is associated with the burials of 338 individuals thought to have been sacrificed. The people and animals sacrificed, such as asses, were expected to assist the pharaoh in the afterlife. It appears that Djer’s courtiers were strangled and their tombs all closed at the same time.

For unknown reasons, this practice ended with the conclusion of the dynasty, with shabtis taking the place of actual people to assist the pharaohs in the afterlife.