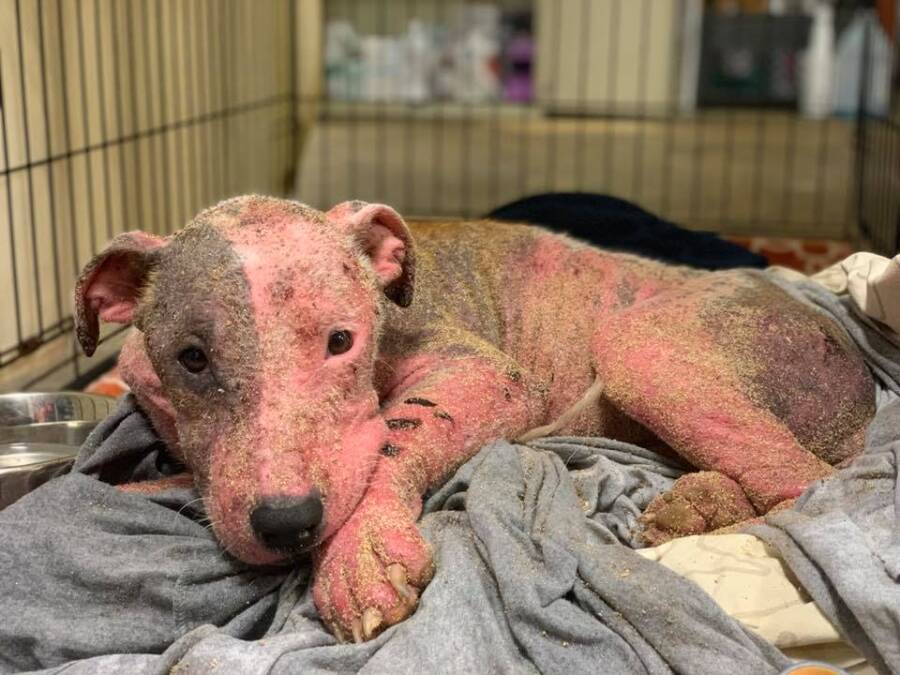 Dog rescued after being buried alive on Hawaii beach

After being buried alive on a Hawaiian beach by her owner, a dog discovered with countless wounds was effectively saved.

Animal rescue organization PAWS of Hawaii said the owner was armed with a machete — and may have gone beyond burying the animal alive, according to The New York Post.

“Someone had just buried her and they had a machete so who knows what was next,” said PAWS.

After rescuing the dog from West Oahu beach on July 9 and placing it in the safety and care of medical professionals, the organization named the dog Leialoha — which means “beloved child.”

PAWS said it’s “entire team rushed out to pick her up” when news of her situation became apparent.

“The man who buried her, we were led to believe, had started to cut her,” said PAWS executive director Ku’ulei Durand.

“This precious girl is incredibly swollen, sunburned and missing 90% of her fur,” said PAWS. Leialoha was in such a terrible condition that she was “bleeding from every inch of her body” during her first bath after being rescued.

The dog was so badly injured that the animal group firmly believes her owner was attempting to kill her.

“He felt he was ending her suffering by trying to end her life, instead of getting her the help she needed,” said Durand. “Her skin, if you were able to smell her, is rancid because she has so many open sores that are infected.”

Durand added that she was a “tough girl, so strong and amazing” for pulling through and fighting to live another day.

“It is so wonderful to see dogs come out of their shell, even with just a day of love,” said Durand.

That one day of love has fortunately been indefinitely extended, as Leialoha has been taken in by a foster mother named Amanda.

The new owner updated shocked onlookers online with a Facebook post that reassured everyone Leialoha would never experience such treatment again.

“My heart was broken and I knew she needed us to foster her,” said Amanda. “She has a long way to go, but the worst is over. Say aloha to Leia!”

As for the dog’s previous owner, no news of potential legal trouble has surfaced as of yet and the perpetrator remains unidentified.

According to KITV 4, Durand explained that repercussions for the man are unlikely, as the laws are quite specific relating to what is considered animal abuse.

“Enforcement around animal laws is very difficult,” she said. “Unless you have a video of the animal being abused, a picture and a report isn’t going to stick.”

“A lot of people will be upset over the condition of Leialoha and the person that hurt her. There are so many things you can do to help, like contact local rescues or shelters and see what you can do to assist.”

Whether or not he planned on killing her with the aforementioned machete is uncertain. What is clear, however, is that the resilient little dog has found a new, loving home.