Chislehurst Caves are a series of intersecting man-made tunnels and caverns covering some 22 miles (35 km) in Chislehurst in southeast London, England.

From the mid-13th to early 19th centuries the ‘caves’ were created from the mining of flint and lime-burning chalk.

Today the caves are a tourist attraction and although they are called caves, they are entirely man-made and were dug and used as chalk and flint mines.

The earliest recorded mention of the mines and lime-burning kilns above dates from a 9th-century Saxon charter and then not again until around 1232AD; they are believed to have been last worked in the 1830s.

During World War I the caves were used as an ammunition storage dump associated with the Royal Arsenal at Woolwich. In the 1930s the tunnels were used for mushroom cultivation. 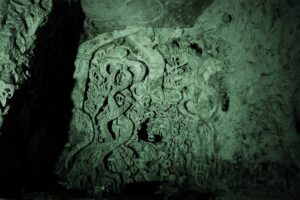 William Nichols, then Vice President of the British Archaeologic Society, suggested in the early 20th century that the groves should first be constructed by the Romans, Sachs or Celts (Iron Age). This, however, is nothing more than speculation as there’s no supporting archaeological evidence to give credibility to the theory.

With the outbreak of both World Wars, Chislehurst Caves was pressed into military service and became an overflow ammunition depot for London’s Royal Arsenal in Woolwich.

The cool, damp conditions made it highly suited for the storage of explosive materials and limited the damage radius of any unforeseen accidents.

By World War II, the cave was transformed during the German bombing campaign of 1940 and 1941 (The Blitz) into one of London’s largest air raid shelters. At its peak, the cave was essentially an underground city inhabited by some 15,000 civilians, sleeping in three-tier bunks or small family pitches costing sixpence per week.

With a population living in close proximity in an enclosed space, the cave was modified to include electric lighting, running water and an air ventilation system.

By 1941 there was even a cinema, barber, three canteens, a police station, a local shop, chapel and a hospital with seven wards and an isolation unit.

From the 1960s, the caves were used as a music venue for its acoustic resonance through the long tunnels. Famous acts to perform in the caves include David Bowie, Status Quo, Jimi Hendrix, Pink Floyd and even the Rolling Stones.