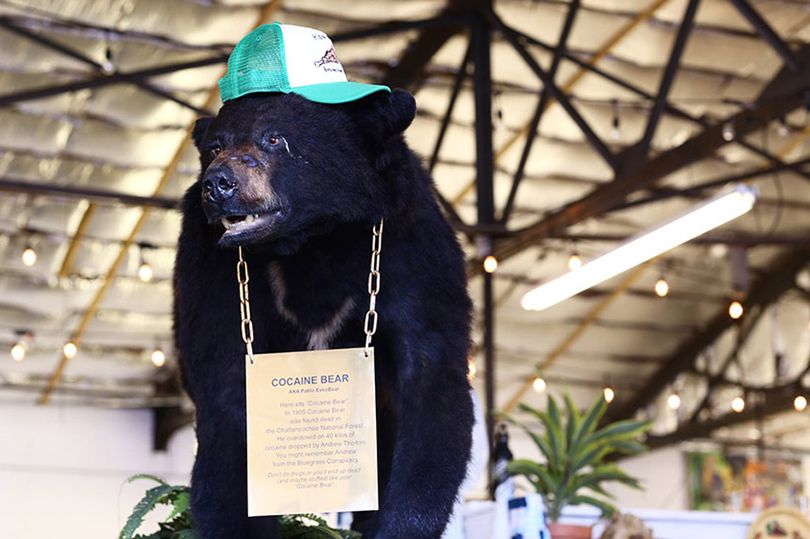 This actually happened, strange as it may sound. It turns out that no one can ingest so much cocaine and remain alive — not even Georgia’s 175-pound black bear.

The bear was on his usual walk through the forest of the Chattahoochee-Oconee National Forest in December 1985, doing normal bear stuff like scratching against a tree or searching for food for the rough winter ahead, when instead of apples or a river full of fish, he stumbled upon 40 plastic bags full of the purest cocaine there was and, hungry as it was, he ate it all up, down to the last speck.

He was not looking for trouble, yet Pablo could not get enough of the star-spangled powder. He died on the spot.

“There isn’t a mammal on the planet that could survive that,” explained the medical examiner of Georgia’s Bureau of Investigation who was assigned to investigate after a nose-powdered lifeless bear was found lying next to the emptied containers in the middle of the woods. When he did the autopsy, he confirmed what was suspected.

“Its stomach was literally packed to the brim with cocaine,” he said after opening the carcass.

The animal was deemed to have suffered an uncomfortable end: “Cerebral hemorrhaging, respiratory failure, hyperthermia, renal failure, heart failure, stroke. You name it, that bear had it.” No one knew how much time it took nor how the bear managed to stay alive long enough to lick everything from the bags.

The death naturally raised questions and was reported by every major newspaper in the United States. After all, it was the strangest drug overdose ever encountered. How did it come to this? How did this unfortunate bear end up coming across $15 million dollars’ worth of cocaine?

Among the first to report the story about the coke-eating bear was The New York Times on December 23, 1985.

Interestingly enough, the men who found the dead bear with the emptied bags were actually tracking a drug smuggler and trying to uncover a drug-smuggling ring in Kentucky.

At the time they were looking for cocaine that they believed was missing. Instead, they found an overdosed bear.

A couple of months earlier, Lexington narcotics cop Andrew Thornton’s body was found in a front yard in Knoxville, Tennessee, along with bags containing 70 pounds of Colombian cocaine, some $4,000 in cash, night vision goggles, two pistols, and a knife.

Despite his privileged upbringing, Thornton had chosen to turn to a life of crime. He was well-known to the local police, and to the FBI and the DEA he was a former shady associate, a corrupt officer from the Federal Bureau of Narcotics who quit becoming a lawyer–and was now suspected to be the head of a criminal organization labeled  “The Company.”

In 1981 he was one of 20 people arrested in Fresno for grand theft and gun trafficking, as well as planning to import a ton of marijuana across the border. However, they knew Thornton had a lot of contacts, possibly including high-ranking government officials.

Naturally, they wished to get as many of his collaborators as possible, so Thornton was allegedly released but closely watched.

In 1985, during one of his fly-over operations, this suspected drug kingpin had a problem with the engine of his private jet and was forced to leave it mid-air. His parachute evacuation went awry so, instead of a safe landing, he turned up dead in Knoxville with 70 pounds of cocaine as proof of his suspected wrongdoings.

However, the police believed he threw away at least as much before he jumped, and three months later Georgia’s Bureau of Investigation confirmed their suspicions when they found one very unlucky bear who encountered $15 million dollars’ worth of white powder.

The poor bear became known as the largest consumer in the Bluegrass Conspiracy, considered to be the biggest drug-smuggling chain at the time in America. Arrests were swiftly made and the bear was sent to a taxidermist for preservation. No one could let a cocaine eating bear go unnoticed.

Today, after three decades, the preserved bear has been seen by thousands. “Kentucky has a lot to offer and even more to say,” writes Kentucky for Kentucky, a company from the Bluegrass region in Lexington that now owns the bear.

They wish to spread good stories about the amazing place they call home, one of which is the story of the undisputed drug eating champion of the world, Pablo Escobar, who these days is displayed in the heart of the Kentucky Fun Mall in north Lexington for everyone to see.