Residents and visitors of San Francisco’s eastern neighborhoods in recent years have likely witnessed the construction of the Central Subway, a $1.6 billion project that will ultimately link Chinatown and South of Market via a Muni light rail line for the first time.

Though that neighborhood today is both a bustling ethnic enclave and a lucrative tourist destination, its predecessor was largely destroyed during the earthquake that devastated the city in 1906.

Now, reports Laura Dudnick for The San Francisco Examiner, archeologists have unearthed the last known traces of the original Chinatown, shedding light on a forgotten part of the city’s history.

Dudnick reports that while clearing ground for a new Muni line, participants in a state-mandated excavation uncovered pieces of industrial sewing machines dating from the late 1800s. 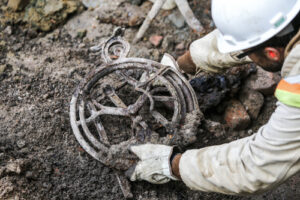 The machines, which were buried eight feet below ground, are thought to have been used in a factory that was destroyed by either the earthquake or else the fire that raged through the city immediately afterward.

“This is basically the last remains of the earliest Chinatown,” Adrian Praetzellis, director of the Sonoma State University team that uncovered the sewing machines, tells Dudnick.

The first Chinatown represented an opportunity for Chinese immigrants drawn to California’s gold rush. Within a few years of their arrival, it had become a booming enclave.

But the city’s white residents and officials viewed the community as a dangerous, vice-ridden eyesore.

When most of Chinatown burned down after the 1906 quake, San Francisco’s city officials attempted to get the community to move to a further-flung part of the city.

But Chinatown’s residents resisted. Despite being held in segregated camps and pressured to leave by the National Guard, they eventually convinced the city officials to allow them to stay.

Next, archeologists will attempt to find out which business housed the sewing machines.

With San Francisco in the throes of a building boom, this very well could be the last chance for experts to shed further light on the lives of the people who used them, and the neighborhood they lived in.