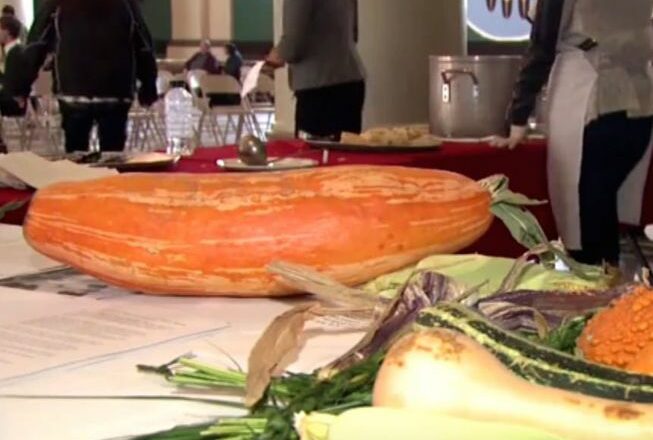 Gardens may be popping up in schools everywhere, but one school garden in Winnipeg, Canada is making news after growing a squash thought to be extinct for hundreds of years.

It all started with an archaeological dig on First Nations land that unearthed a small clay vessel estimated to be about 800 years old.

Inside the vessel, the archaeologists found preserved seeds of an ancient squash.

Students at Canadian Mennonite University successfully grew one large squash from the seeds, but they aren’t stopping there.

The plan is to save the seeds from that first revived squash and then grow even more squash from those.

The goal is to never let this squash go extinct again, according to APTN National News.

Brian Etkin, Coordinator of the Garden of Learning in Winnipeg, sees this revived squash as much more than a vegetable.

“This squash is representative of a tribe of a large community and everybody in that community having a place and food being a right on citizenship,” said Etkin.

When the seeds were first put into that clay vessel all those years ago, they were likely meant to be used much sooner than now, but the discovery of them is a reminder that saving seeds is the best way to ensure plant varietals survive.

The fruits and vegetables seen in the grocery store and even at the farmer’s markets are just a fraction of the varieties that exist.

Over the past 100 years or so, we’ve decreased the variety of produce grown and instead focused our efforts in cultivating species that produce a high yield or are able to travel long distances.

But, we’re discovering we’re close to losing so many varieties, and seed savers are working to bring back varieties that most people have forgotten.

Thanks to the ancient indigenous person who put those seeds in a clay vessel hundreds of years ago, this squash varietal won’t be lost to history.