An ancient London churchyard, an ash tree is encircled with hundreds of overlapping gravestones.

Inside an ancient London churchyard, an ash tree is encircled with hundreds of overlapping gravestones placed there by classic novelist Thomas Hardy. 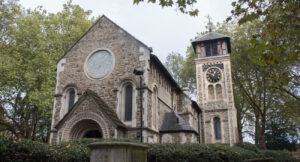 It might sound strange to encourage you to seek out a single tree in a cemetery, but this isn’t any ordinary ash.

Amidst the stones and pathways, you’ll find the famous Thomas Hardy Tree, named as such to commemorate one of Britain’s most regarded writers.

The cemetery alongside London’s St. Pancras Old Church, which is considered by many to be one of England’s oldest places of Christian worship, is the site of a number of fascinating stories—for one, Mary Shelley and Percy Bysshe Shelley planned their elopement there while visiting Mary’s mother’s grave.

But perhaps one of its most striking oddities is the Hardy Tree, an ash tree surrounded by hundreds of weathered gravestones, layered practically on top of one another. 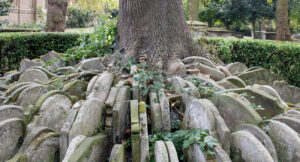 How did they come to be arranged in this way?

In the mid-1860s, Britain’s rail system was experiencing immense growth, and London was outgrowing its existing lines.

In order to accommodate the growing population of commuters, an expansion was planned—directly affecting the graveyard at St. Pancras.

In order to make way for the new train line, an architecture firm was contracted to perform the sensitive task of exhuming the remains and reburying them at another site.

In the tradition of dumping rather unpleasant work on those lowest on the totem pole, the job was promptly assigned to their young employee, Thomas Hardy, who in the following decades would publish many classic novels such as Far from the Madding Crowd and Tess of the D’Urbervilles.

After the essential duty was completed, there remained hundreds of headstones, along with the question of what to do with them.

Hardy’s solution was to place them in a circular pattern around an ash tree in the churchyard in a spot that would not be disturbed by the railway.

One can only speculate as to how he arrived at this decision, but over the years the tree has absorbed many of the headstones, life and death melding into one image of grotesque beauty, preserved for centuries. 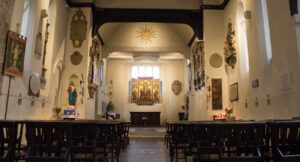