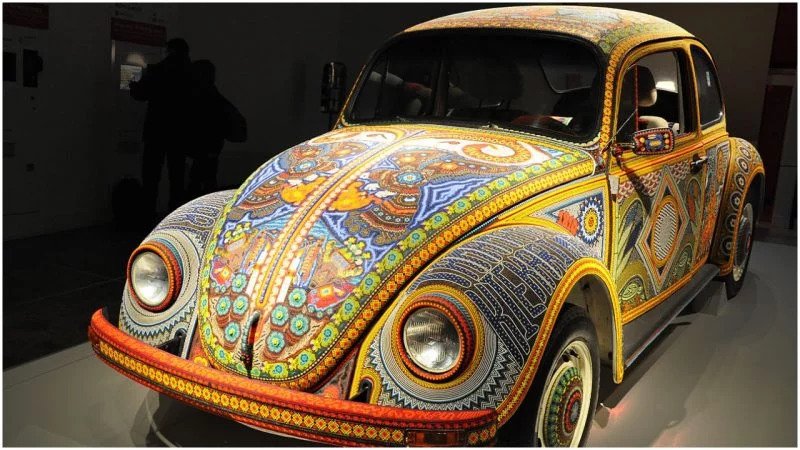 You can now say that you have seen a Volkswagen Bug made out of beads… and not only beads, over 2 million of them!

The Volkswagen Beetle first rolled out in 1938 and this model in specific is definitely one of the most decorative. By the time production on these Bugs ends in 2003, over 21 million units surpass production!

The manufacture of the Beetle was ordered by Adolf Hitler with the intention of designing a car affordable for everyone. As such, the popular Bug has been loved by millions of people.

The first one was designed by Ferdinand Porsche, while the last Beetle car was produced in Mexico in 2003, and delivered directly to the VW museum in Wolfsburg, Germany.

Over almost a century, people have designed and customized their Beetles in some unique ways. However, the Vochol is probably incomparable with any other: It is decorated with more than two million glass beads.

The genesis of the Vochol is rooted in the culture of Huichol Indians of Nayarit and Jalisco states, Mexico, who are known for their intricate beadwork.

In the past, they used to decorate items such as masks, Jaguar head figures and bull horns using seeds as the primary material.

Nowadays, the old materials are replaced with ceramics, metal, stone, and glass. However, the traditional technique of gluing them with a type of wax made in the Mexican state of Campeche is still applied.

The original Volkswagen Beetle is iconic in Mexico. Although they are now replaced, in the past, all taxis around Mexico used to be Beetles.

So, herein lays the name – Vochol – which is a hybrid of “vocho”, the Beetle’s nickname in Mexico, and Huichol. Two families, the Bautistas from Jalisco and the Ortiz from Nayarit, embarked on this project that eternalized their traditional art form.

Artists Francisco Bautista Carrillo and his daughter Kena Bautista completed the work with the help of six other artisans from both families. The project to create this Volkswagen bug with beads began in 2010 with the sole purpose of creating a piece of art that would promote Huichol culture and their artistic skills.

After 4,760 man-hours and utilizing 2,277,000 beads, the Vochol was completed. The seven-month-long project was finalized at the Muse de Arte Popular in Mexico City.

All the images depicted on the Vochol represent the Huichol culture. On the roof is pictured a large sun and four eagles, representing the union between men and the gods.

The sides of the car are decorated with images of the gods of fire, corn, sun, peyote, and deer, while on the back of it is a shaman steering a canoe. On the hood, there are two snakes above clouds symbolizing rain.

There is also a representation of the Eye of God. Depicted as a figure with five points it illustrates the light, strength, knowledge, history, agriculture and the present time, while the center represents the source of life.

On the front fenders of the Vochol are inscribed the phrases “100 years since the Mexican Revolution” and “200 years of Independence” in the native Huichol language.

It is considered “The most Mexican Vochol” of all. After it was completed in 2010, the Vochol toured different parts of Mexico and the world starting with the contemporary art fair Zona MACO and the Museum of Popular Art in Mexico City and extending its voyage to museums in the United States, Europe, Asia, and South America.

This fascinating Volkswagen bug with beads has been exhibited in the Smithsonian, the National Museum of the American Indian in Washington, the Musée de Quad Branly in Paris, the exhibition of Potters Fields Park in London, and many others.