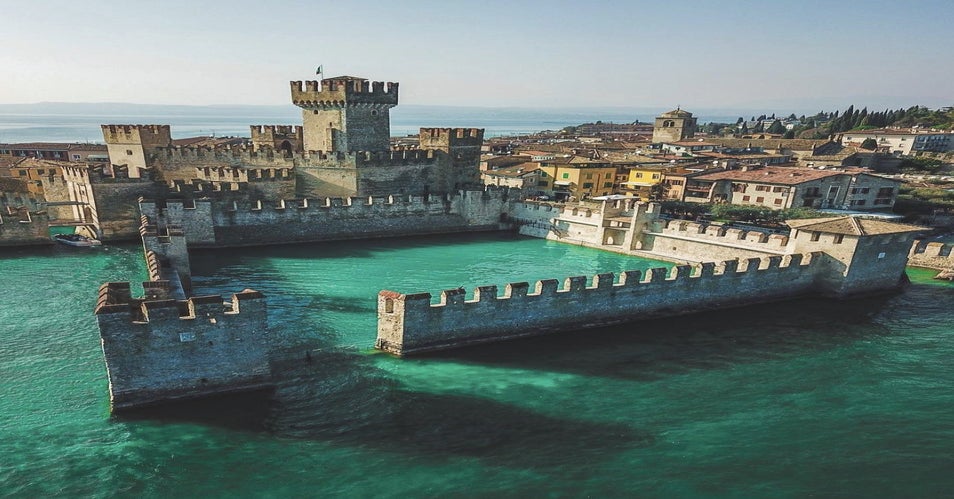 Scaliger Castle is located in the Italian lakeside town of Sirmione. Sirmione is a comune and town located in the province of Brescia in the region of Lombardy.

Sirmione has a beautiful historic center which is situated on top of a small peninsula that juts out into the southern portion of Lake Garda.

The Scaliger Castle is considered one of the finest examples of medieval fortifications, including a very rare fortified port.

Sirmione was once known as Garda and had been a Veronese summer resort for the elite since the 1st century BC.

The town had grown to become one the most important Roman cities in northeast Italy, Garda had been praised by several artists and poets of the time, including Catullus.

During the 4th and the 5th century AD, the town became an important fortified strongpoint for the defense of Lake Garda’s southern section.

A settlement had existed in the area even after the Lombard conquest and had depended directly on the King for its operation. King Desiderius’s wife Ansa had founded a church and monastery in the city.

In the first half of the 13th century, Sirmione fell into the hands of the Scaliger family. It is believed that the castle was founded by Mastino I, Della Scala.

The town continued to be an important military center until the 16th century. Until the 19th century, a garrison remained in the castle.

Sirmione was part of the Republic of Venice from the year 1405 till 1797 when it was acquired by Austria. Later, in the year 1888 Sirmione became a part of Unified Italy.

The castle was built in the 13th century and was a port fortification used widely by the fleet of the Scaliger family.

The castle dominates the landscape of the town and has a large moat where ducks and swans can be seen today.

There are 150 steps which lead up to the ramparts and the tower is open to the public for viewing.

From the top of the tower, beautiful views of the Lake Garda can be enjoyed.

The courtyard of the castle was a garden earlier where the mainland was controlled by the guards from the embrasures. The prison was located below the main keep.

The Sirmione castle has large crenelated walls and towers and an inner porch which is set in medieval and Roman stones. The entire structure is surrounded by water and a second defense wall can be reached through a drawbridge.

There is also another walkway along the wall from where the striking dock can be admired. The doors were fitted with several different systems for locking.

The drawbridge was for the pedestrians and carriage which had a metal sluice and had two hinged doors.