Next, to the Point Fermin Lighthouse (about 9 miles southeast of Long Beach), you will discover one of California’s most fascinating beach spots.

The Sunken City of San Pedro (a community in Los Angeles city limits) is what remains of a devastating slow-moving landslide that occurred 85 years ago.

A large area of land on the coast began abruptly sliding into the sea, spurring the prompt evacuation of those who had once peacefully resided in the area’s cheery bungalows. Fortunately, everyone got out safely, and even most of the homes were saved, but a few of the old bungalows went crashing into the ocean.

Geologists could not account for the sudden onset of the landslide, but they were able to measure its destruction. At the height of its slippage, the land was descending at 11 inches per day. This made for some very dramatic changes in the landscape in less than a workweek.

The formerly picturesque neighborhood had been reduced to ruins. The area has known its share of landslides since then, with the most recent being in 2011.

A portion of the scenic drive of Paseo Del Mar gave way all at once, leaving a gaping hole where concrete and rock fell almost 100 feet.

Because the land was unstable for a time, and the remaining parts so steep, the area was fenced off and prohibited from public use. This rule is still in place today, though many visitors still come to see the otherworldly scene that is now the Sunken City. 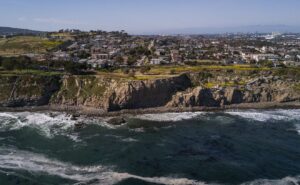 The veering hillsides, loose dirt, and craggy rock faces of the land surrounding what’s left of the foundations and structures of the old homes that were removed. Over the past many decades, artists have turned these surfaces into their own canvases, leaving vibrant graffiti and surrealistic paintings for all to enjoy.

This medley of images forms an art gallery of sorts as one hike through the trails that wind through the ruins, creating an almost post-apocalyptic scene. Leafy palms reach up from between these painted tableaus, and, as the area is rarely maintained, the litter of glass bottles lends to the abandoned atmosphere. If you venture in far enough, you may even stumble upon some vintage furniture that has been arranged to look out over the ocean. 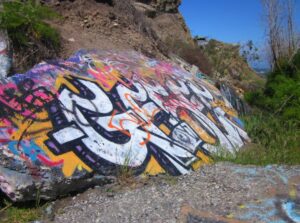 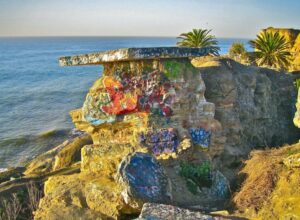 Walking down the trails will eventually lead you to the water’s edge, where you’ll find tide pools filled with alien-like purple urchins, and perhaps even a lounging seal. The Sunken City of San Pedro offers many amazing spots for obtaining a view of the water and the ships that glide along its surface.

You may very well run into other visitors if you choose to make the Sunken City the place of your next adventure. Many seek it out as a clandestine retreat, where they can relax in the sun and take a break from the modern world.

Since the area has been fenced off, you will have to enter the city by unconventional means. There are a few holes beneath the fence in places that many locals and regular visitors know by heart, and there is also the option of climbing over the fence.

Another common route is to walk to the Sunken City via the rocky shoreline starting at Cabrillo Ocean Beach. Just be aware that erosion is causing the bluffs to crumble. 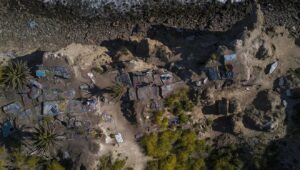 As formerly mentioned, this area is technically off-limits to the public, though fines are rarely imposed on “trespassers.” However, please acknowledge that entering the area is done at your own risk, and is against the law.

Even if there are visitors who are also exploring the ruins, you won’t have any trouble finding private nooks and outcrops that can make you feel as though you’re in a world of your own.

Whether you’re coming to scale the rocky cliffs or simply want to find a peaceful spot to sit, remember to dress in clothes fit for hiking. The loose soil, crumbling rocks, and steep paths don’t make this an ideal place to wear thin flip-flop sandals. Also, keep in mind that this area is not appropriate for children.

The Sunken City is adjacent to Point Fermin Park, a beautifully lush green space and home to the stately Point Fermin Lighthouse. This is another prime spot for catching views of the ocean and dazzling sunsets.

Just north of this park, you can find the Korean Friendship Bell, another one of San Pedro’s historic treasures. If you head back east toward Long Beach, you can stop in at Cabrillo Beach. This popular shore-side hangout is a great place to surf, scuba dive, or simply sunbathe.