‘Elite warrior’ armour which could date back 3,900 years found in Siberia

Archaeologists in Siberia have uncovered a suit of animal-bone armour that they believe dates from 3,500 to 3,900 years ago.

The sheath is made of the bones of an unidentified animal and was discovered in “perfect condition.” According to the Siberian Times, experts say the armour was designed for an elite warrior.

The garment would have effectively armed the warrior against arms such as bone and stone arrowheads, bronze axes, spears tipped with bronze, and bronze axes, according to archaeologists.

At the site near the Siberian city of Omsk, the armour was buried separately from its owner around 1.5 metres below ground. No other similar battle garments have been found at the site.

Nearby, the experts have uncovered artefacts from the Bronze Age Krotov culture of animal breeders.

But this specimen resembles finds from the Samus-Seyminskaya culture, which originated some 1,000km away before its peoples migrated to the Omsk area.

Researchers now hope to determine the exact age of the piece, and whether it was a gift, part of an exchange, or from the spoils of war. Initial analysis has revealed it could be up to 3,900 years old.

The experts have called the site “unique” as it is home to burial grounds between the Early Neolithic period to the Middle Ages, as well as other settlements and manufacturing sites.

“It is unique first of all because such armour was highly valued. It was more precious than life, because it saved life,” Boris Konikov, the curator of the excavation, told the newspaper. 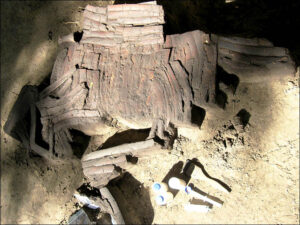 “Secondly, it was found in a settlement, and this has never happened before.”

The site, beside the Irtysh River, is now owned by Popov Omsk Radio Factory which has supported the archaeological research. Konikov, who is now a representative of the plant, said he is supervising the excavations and aims to protect the area.

Scientist Yury Gerasimov, a research fellow of the Omsk branch of the Institute of Archaeology and Ethnography, said that while there is no indication that the site was a place of worship, the “great material value” of the armour makes it like.”

“At the moment we can only fantasize – who dug it into the ground and for what purpose. Was it some ritual or sacrifice? We do not know yet.”