In the early 20th century, chance led us to the gate of the underground town of the most prominent giants of that period. This was an unprecedented find in the Grand Canyon, which soon repeated in the press. 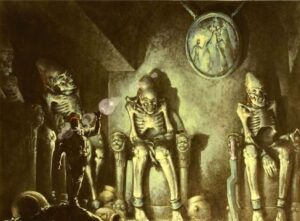 The Grand Canyon was the birthplace of a culture in which, according to an article published in the Gazeta de Arizona in April 5, 1909, people of cyclopean proportions existed. A civilization that only left us some structures as a testimony of its existence.

The article mentions the discovery of a huge subterranean citadel by an explorer named GE Kinkaid, who accidentally found it while rafting on the Colorado River. It is worth mentioning that Kinkaid was a recognized archaeologist and had the financial support of the Smithsonian Institution.

According to their descriptions, the entrance to this mysterious city was at the end of a tunnel that extended for something more than 1600 meters underground.

Kinkaid was impressed that the cavern was almost inaccessible. The entrance was about 450 meters under the wall of the steep canyon. The place was in a zone protected by the government and the access was penalized under fine. 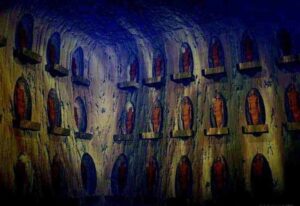 “Above a shelf that could not be seen from the river was the entrance to the cave. When I saw the chisel marks on the wall inside the entrance, I got interested, I got my gun and I went in. “Kinkaid said.

The architecture found suggested that the builders of that subterranean city possessed advanced engineering skills.

The central axis of the underground city made it a gigantic camera from which radiated passages similar to the radii of a wheel. The walls of the main chamber were adorned with copper weapons and tablets covered with symbols and hieroglyphic characters very similar to those we know in Egypt.

Another interesting finding was the discovery of mummified bodies inside the citadel. None of the mummies found were less than 2.74 meters and all were wrapped in dark linen. Kinkaid said he had taken photographs of one of them with a flashlight, however, none of those photos were found.

Further explorations revealed interesting data on the beliefs of these alleged giants of the city. 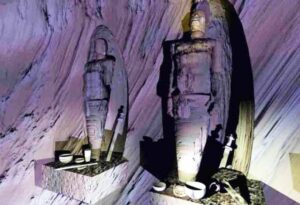 More than 30 meters from the entrance is a room with a cross-shaped plant several tens of meters long and where an idol was found that could have been the main god of his religious system.

He was sitting cross-legged and with a lotus or lily flower in each hand. His face had oriental features as well as the carving of the cave. This idol had a certain resemblance to Buddha, although the scientists of the time did not finish assuring that it represented that religious cult.

The article also talks about the discovery of ceramics and other artifacts with trademarks having been manufactured in other parts of the world. Perhaps a rare mixture of cultures that scarcely occurs in archaeological finds, so this discovery would be of unprecedented importance.

The last camera they found on the exploration was what Kinkaid and his partner, Professor SA Jordan, a ceremonial crypt, believed to be at the end of the great hall where they found the mummies.

Unfortunately, the article does not give many more details about this discovery. Nor are there any official versions or references to this enigmatic subterranean city. The Smithsonian Institute denies having knowledge of the existence of this underground city.