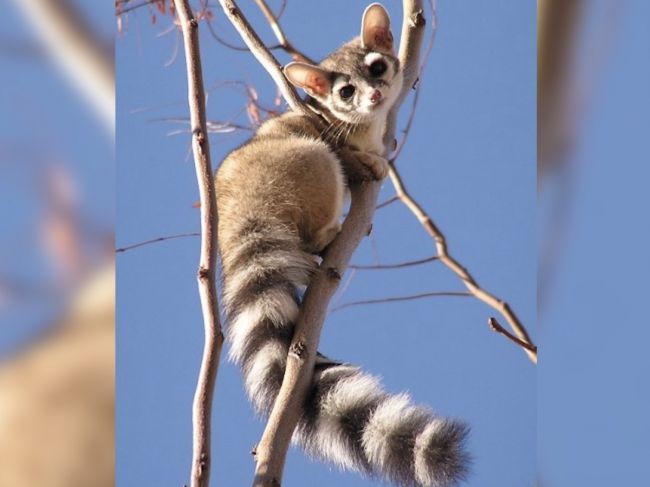 Ringtail Cats: Photos of the ‘Cutest Animal in North America’

Which animal would get your vote for the ‘cutest in North America?’ Before you make up your mind, make sure to acquaint yourself first with the adorable ringtail cat, a common but elusive little critter found primarily in West and Southwest USA.

It is also a land of iconic symbols like the Sonoran Desert saguaro cactus, Carnegiea gigantea, shown here, of spectacular sunsets and of an endless list of diverse cultures who found themselves coming together to help shape and define its history.

In this land too, a vast array of unique species of animals are also found, with one mammal, the ringtail cat, just possibly vying for the title of “Cutest Animal of North America.”

Ringtail cats are basically nocturnal, and, except during the mating season, live solitarily. Both males and female ringtails establish a home range that can be as large as 336 acres (136 hectares).

They are very timid toward humans and tend to be seen less often than their raccoon cousins. Most of their active time is spent in search of food. Ringtail cats are omnivorous and once done feeding, will spend time grooming while sitting on their hindquarters like a domesticated cat. Just like a cat, the ringtail will lick its forepaw, then use it to wipe and clean its ears, face, and snout.

The distinctive bushy tail is often longer than the head and body combined, and the 14 to 16 interspersed black and white bands give rise to the animal’s name.

The ringtail’s eyes are black to dark brown, set within a mask of whitish-buff. Being an omnivore, the ringtail sports semi-retractable claws ideal for digging and climbing. Their small mouths hold 40 teeth, and their canines are well developed.

Ringtail cats are also known by other names. In the American West, ringtails were called miner’s cats, since they were often found in and around the mining camps in search of the many rodents that were commonly found around the miners and their food. In some areas, they are called civet cats because of a foul odor they secrete when startled or attacked.

The second species of ringtail, found in southern Mexico, is known as cacomistle, Bassariscus sumichrasti. Cacomistle is derived from “tlacomiztli,” a name from the language of the Nahuatl Indians of the Valley of Mexico meaning “half mountain lion.”

From here to there

The other ringtail species, cacomistle (Bassariscus sumichrasti) are found throughout southern Mexico and have been known to show up in Central America.

With such a wide distribution, ringtail cats can survive in a variety of habitats. A rocky outcropping of canyons when available seem to be their favorite habitat. Yet, they actively survive in mountain conifer forests, pinyon pine, and oak woodlands, chaparral, deserts, and semi-arid regions. Riparian areas become a favorite homesite in all the environments because the source of water increases their food availability.

The ringtail cat (B. astutus) is not a cat at all but a member of the raccoon family, Procyonidae. A quick look suggests the ringtail cat is an adorable mix between a fox and a raccoon.

Its face is fox-like with its small pointed nose and large rounded ears; its elongated body and the long, black-and-white striped tail are similar to a raccoon’s. The topside of its soft fur is yellowish to dark brown, while its belly fur can be shades of white buff.

Female ringtail cats come into heat in the spring of each year. They tend to choose a den in crevices, boulder piles or a tree hollow. Gestation lasts between 51 and 54 days, resulting in a litter of two to four young. When born, the young are unable to see or hear and are covered with short beige-colored hair. Young will open their eyes when they are about a month in age and will acquire their adult coloration at 4 months.

They begin to eat solid food between 30 and 40 days after birth and are normally weened by 10 weeks. Female ringtails take the primary role in caring for their newborns, but males will interact and even play with the kits as the playful young grow older. Juvenile ringtail cats reach sexual maturity at about 10 months of age.