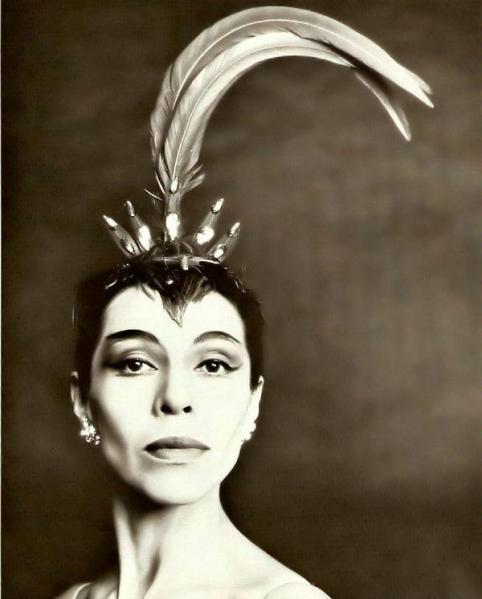 Maria Tallchief’s talent and persistence allowed her to conquer stereotypes both at home and abroad and become a record-breaking dance star and America’s very first prima ballerina.

One night in 1949, a 24-year-old woman named Maria was poised backstage, awaiting her cue. Her costume was elaborate and dramatic, which suited the passionate dancer well.

Every muscle in her body felt coiled in anticipation. It was opening night, the night that would decide whether this show would make or break her career.

But as the opening stirrings of Stravinsky’s Firebird sounded through the theater, Maria discovered she was not nervous. She was ready.

Born to an Osage father and a Scottish/Irish mother, both Elizabeth Marie and her sister Marjorie showed early talent in ballet. When the family moved from Oklahoma to Los Angeles, CA, Elizabeth continued her dancing studies.

During this time she chose the stage name, Maria Tallchief, resisting pressure from peers who thought her “Indian” last name would be a hindrance in the dancing world.

Maria quickly gained attention among ballet critics for her precise technique, her passion, and her frenetic energy. She threw everything into her performances with incredible energy and athleticism, striving to make each performance her best.

She danced with several prominent ballet companies in America, catching the attention of famed choreographer George Balanchine. In addition, she became the first American to dance with the Paris Opera Ballet.

She worked closely with Balanchine, and She created several roles for her that would go on to become iconic representations of American ballet. These included Orpheus, Caracole, and Firebird.

Despite her growing fame in the glamorous dancing worlds of New York and Paris, Maria remained proud of her Osage Native American heritage.

She resisted any attempts to stereotype her or other Native Americans and wanted to be judged solely on the basis of her talent.

“Above all, I wanted to be appreciated as a prima ballerina who happened to be a Native American, never as someone who was an American Indian ballerina.” Through her efforts, Maria Tallchief’s name became synonymous with American ballet during the mid-twentieth century.

Maria continued to dance with the New York City Ballet until her retirement from the stage in 1965. Soon after she moved to Chicago, where she created a lasting impression on the Chicago ballet scene through her teaching.

She founded a ballet school known as the Lyric Opera in 1974, and in 1981 she began a six-year run as the artistic director of the Chicago City Ballet.

In 1996, Maria became one of five American artists to receive a Kennedy Center Honor, and later that year she was inducted into the National Woman’s Hall of Fame.

Maria’s startling energy and passion for dance helped to shape modern American ballet, and her pride in her Osage heritage made her a true pioneer.