Built in 1158, The Cathedral of St Andrew was the largest and most remarkable church in Scotland

The Cathedral of St Andrew also known as St Andrews Cathedral is a ruined Roman Catholic cathedral in St Andrews, Fife, Scotland. Built in 1158, it was the largest cathedral and most magnificent church in Scotland.

The cathedral became the center of the Medieval Catholic Church in Scotland as the seat of the Archdiocese of St Andrews and the Bishop and Archbishops of St Andrews. 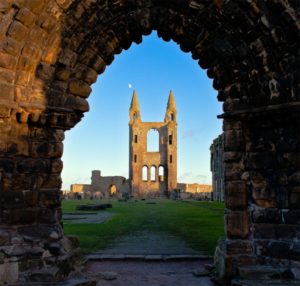 The Cathedral was built on the grounds of an older church called St. Regulus or St. Rule which had been built in the Romanesque style. To the east of the site, there is an even older religious site, the Church of St Mary on the Rock, the Culdee house that became a Collegiate Church.

The work on the new cathedral started in 1158 and continued for over a century. The west end was blown down in a storm and rebuilt between 1272 and 1279. On 5 July 1318, the cathedral was dedicated in a ceremony before King Robert I.

In 1559, during the Scottish Reformation, the people of St Andrews attacked the cathedral and stripped it of its altars and images.

Abandoned in 1561 in favor of the city’s parish church, the cathedral gradually fell into ruin. Afterward, large portions of the ruins were taken away for building purposes, and nothing was done to preserve them until 1826.

Some of the priory buildings remained intact at the end of the seventeenth century and considerable remains of others existed, but nearly all traces have now disappeared, except portions of the priory wall and the archways, known as The Pends.

There is a visitor center in the cathedral that includes a large collection of carved Pictish stones and also the St Andrews sarcophagus, which is known as one of the best sculptures that had survived from the Picts.

Today the tower commands an admirable view of the town, harbor, sea, and surrounding countryside. In the Middle Ages, a spire atop the tower made it even more prominent.

The tower was originally ascended using ladders between wooden floors, but a stone spiral staircase was inserted in the 18th century.

Built-in gray sandstone ashlar, the cathedral island and sea-mark saw from many miles away.