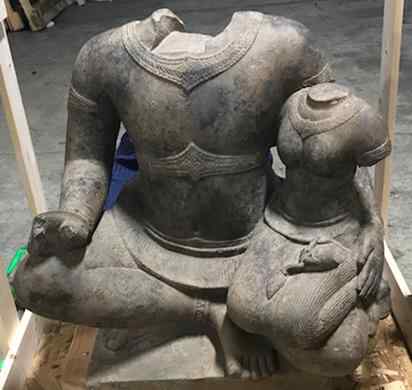 U.S. Immigration and Customs Enforcement’s Homeland Security Investigations reports that a Cambodian sandstone sculpture dating to the tenth century A.D. has been recovered from an auction house.

The headless statue, thought to have been looted during a twentieth-century conflict in Cambodia, depicts the Hindu god Shiva, who sits with his arm around his wife, Uma. The sculpture will be returned to Cambodia at the conclusion of the investigation.

Described as a Shiva and Uma statue, the artifact was discovered during an ongoing HSI New York investigation dubbed “Indochinese Peninsula Plunder” in the Southern District of New York.

The investigation focuses on the smuggling activities of Douglas Latchford, a private collector linked to numerous looted Cambodian antiquities.

Originally purchased by a private collector in California, the statue was discovered for sale at a prominent San Francisco auction house following the collector’s death in 2015.

It will be returned to the Cambodian people at the conclusion of this HSI-led investigation.

HSI has several open investigations involving the recovery of looted artifacts that were trafficked from several countries in Southeast Asia during the eras of conflict throughout the 20th century.

HSI San Francisco and HSI New York have collaborated on multiple investigations linking antiquities dealers to a criminal network involved in looting artifacts from Southeast Asia, many of which have been found in museums and collections throughout the U.S.

HSI is the largest investigative component within the U.S. Department of Homeland Security.

Among its numerous investigative programs, HSI conducts criminal investigations that involve the illicit trafficking of cultural property and art.

These investigative efforts are geared toward the recovery of artifacts that have been reported lost or stolen.

HSI has a global reach through its 77 offices in 51 countries and works closely with foreign governments to conduct joint investigations.