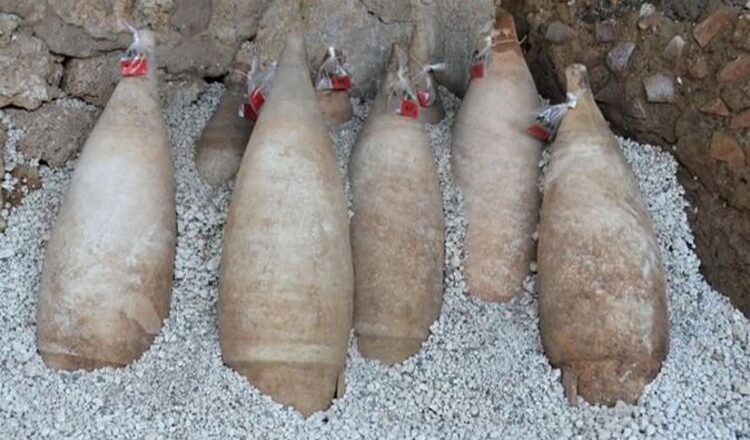 During a documentary, Archaeologists discovered “the ketchup of the Roman world” buried in Pompeii for nearly 2,000 years in what was dubbed “an incredible discovery.”

Mount Vesuvius, a stratovolcano in modern Italy, erupted in 79AD in one of the deadliest volcanic eruptions ever, spreading a cloud of overheated tephra and gases up to 21 miles in height.

This natural disaster ejected 1,5 million tons per second of molten rock, pulverized pumice and hot ash, crushing Roman cities and burying thousands of people under the flaming rubble The horrific event, however, also covered the city in a blanket of thick material, leaving the possibility of discovery to this day.

One such discovery was made in 2014, thanks to the work of Italian archeologists, which contributed to the replication of a recipe for Garum a 2,000-year-old sauce.

Channel 5’s 2019 series “Ancient Mysteries” explained how the discovery was made.

The narrator said: “Garum became the condiment of choice across the Empire, used for cooking and enjoyed as a garnish”, it was the quintessential Roman ingredient.

“The secrets of why Romans consumed so much of it have remained elusive because it had been thought that the original recipe for garum had been lost to time.

“But now it’s being resurrected thanks to an incredible discovery in one of ancient Rome’s most fascinating lost cities – Pompeii.

“In 2014, Professor Dario Bernal-Casasola and his team from the University of Cadiz began excavating at Pompeii in search of garum frozen in time.”

The series continued, explaining how the recipe was deciphered.

It added: “In an incredible stroke of luck, the team found a garum store and, inside, were 2,000-year-old traces of the sauce itself. “Now, for the first time ever, an actual sample of garum could be analysed to find out exactly what it was made of with experimental scientist Dr Victor Pallassios.

“Through microscopic analysis, the team found pollen grains revealing that a selection of herbs were used in Pompeii to flavour the sauce.“And the sample told them exactly what species of fish was used.”

Dr Victor Pallassios then revealed the exact ingredients used to make the sauce. He said: “Surprisingly, even after 2,000 years, it still smells of garum, it smells of fish.

The spices are characteristic of the Mediterranean – rosemary and coriander.“The remains have allowed us to study the bones in order to know the species that they were using, we know it was being produced with anchovies.”

Dr Benedict Lowe from the University of North Alabama explained why the discovery was so important. He added “Garum is found everywhere, in every house, regardless of wealth.

“Everybody was eating it, this was the ketchup of the Roman world.” Like the modern fermented soy product soy sauce, fermented garum is a rich source of umami flavouring, including monosodium glutamate.

When mixed with wine, vinegar, black pepper, or oil, garum enhances the flavour of a wide variety of dishes, including boiled veal and steamed mussels. However, it was also used by peasants to improve the taste of bread.