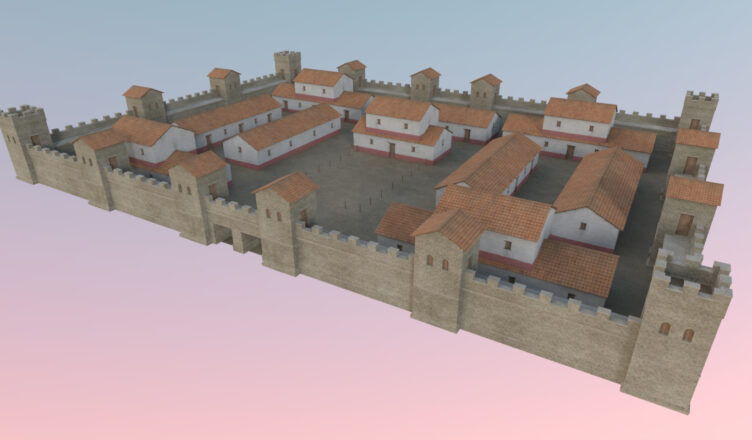 The local town council reported that archeologists surveying Exeter, England, a bus station had found evidence of a defensive fort dating back to Britain’s Roman conquest.

Per a press release, workers excavating the structure—built during the early 1960s and scheduled to be replaced by a new station and accompanying leisure complex—found three ditches said to represent a previously unknown Roman compound, as well as coins, pottery and imported Samian tableware presumably used by troops based at the site.

According to the Telegraph’s Mike Wright, the fort likely served as a satellite of Isca Dumnoniorum, a military fortification garrisoned by 5,500 legionaries tasked with pacifying the fiercely resisting local populations in the region.

Established soon after the Romans’ invasion of Britain in 43 A.D., Isca Dumnoniorum was supported by a series of smaller forts located along connecting roads.

The newly discovered structure is the first recorded along an eastward road; previously, evidence of smaller forts was limited to roads leading south of Exeter.

Stephen Rippon, a landscape archaeologist at the University of Exeter, tells BBC News the find was a “complete surprise.” He adds, “There was no evidence known of [the fort] at all.”

As the council statement notes, the ditches found at the site are typical of those seen in Roman military compounds: One, a V-shaped trench featuring an “ankle breaker” pit designed to deter converging soldiers, was situated on the outer edge of the fort, while another, so steep it was nearly vertical, contributed to inner defenses and was placed directly below a rampart.

If any enemy attackers reached this point, the steep slope would have ensured that defenders firing from the rampart above had the upper hand.

Although the press release suggests the inside of the fort was located west of these trenches, Rippon says it is difficult to make an exact prediction regarding the compound’s size or location in relation to the ditches.

Andrew Pye of the Exeter City Council says the discovery demonstrates “just how pivotal a role the Exeter area played in the first decades of the Roman conquest and subjugation of Britain.”

Describing the fort as a “very important and completely unexpected” discovery, Pye notes that its unveiling testifies to “just how much of the city’s history can still survive in unlikely places,” including those damaged by wartime bombing and modern concrete foundations.

Previous archaeological discoveries in the area include the 1970s unearthing of an ancient fortress and bathhouse, as well as the identification of multiple forts of varying size and significance.

Roman forces left Isca Dumnoniorum and its network of smaller forts around 75 A.D. when the army shifted its attention to southern Wales.

Exeter, now acting as the region’s capital, was transformed into a civilian town, with improvements including public baths and defensive stone walls introduced over the coming decades.

By 360, Abbie Bray writes for Devon Live, the village had started to shrink, and in 410, the Romans abandoned Britain completely. Exeter remained sparsely occupied until 928 when settlers once again returned to the area.