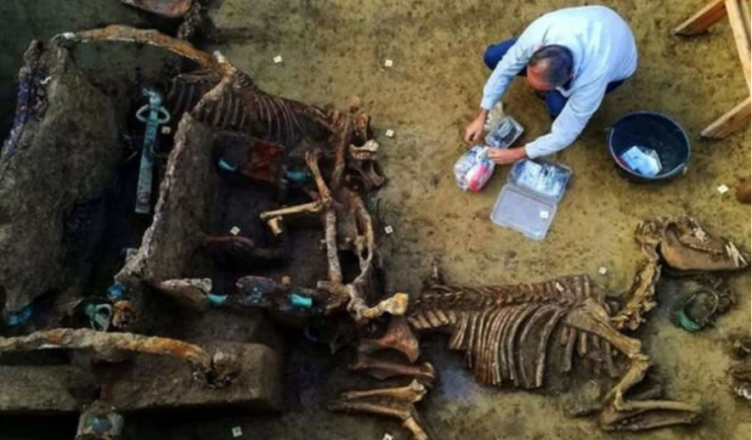 A Roman chariot was discovered in a bizarre archeological discovery along with the fossilized remains of horses in Croatia.

The chariot, which was thought to be some 2000 years old, was discovered on the horses that pulled it with nearly perfect fossilized remains. The discovery gave an insight into the world of the wealthy from ancient days and the lavish manner in which the items were buried.

The find took place near Vinkovci town in eastern Croatia. The region was a small part, like England and Wales, of the vast Roman Empire covering much of Eastern Europe , the Middle East, Western Europe.

The researchers found a large burial chamber in which the two wheeled-carriage was unearthed. The remains of the skeletons of two horses were also found, one strewn across the front of the carriage, the other neatly laid out in the exact position it was laid to rest.

Roman expert, Boris Kratofil, explained to local media that the ritual was common to those who were wealthy enough to own such luxuries in ancient Rome.

He said the custom was exceptional and particularly common during the Roman period in the province of Pannonia in which modern day eastern Croatia sits.

He said: “The custom is associated with extremely wealthy families who have played a prominent role in the administrative, social and economic life of the province of Pannonia.”

The chariot and horses are thought to be from the third century AD.

However, the researchers cannot be sure, and so are working to find a more accurate time stamp for the two discoveries. Archaeologists from the City Museum Vinkovci and Croatia’s Institute of Archaeology were involved in the project.

Marko Dizdar, director of the Institute of Archaeology, labelled the “sensational” discovery unique in Croatia.He said: “After this comes a long process of restoration and conservation of the findings, but also a complete analysis of the findings.

“In a few years we will know a little more about the family whose members were buried in this area 1,800 years ago.”

Mr Dizdar added that the horses may not have been local. He continued:”We are more interested in the horses themselves, that is, whether they were bred here or came from other parts of the empire.”

“This will tell us more about the importance and wealth of this family. “We will achieve this through cooperation with domestic as well as numerous European institutions.”

The concept of the chariot is thought to have originated in mesopotamia in around 3000 BC, with monuments from Ur and Tutub from the period depicting battle parades that included heavy vehicles with solid wheels.

The chariot soon proved superior during battle, with horses being used to pull the carriage around 2000 BC, providing militaries with hitherto unprecedented mobility.

It spread across the world, being used by Egyptians, Celts and much of Europe as a means to transport goods and weaponry during battles and military expeditions. Mesopotamia was an advanced civilisation that emerged from the Neolithic revolution from around 10,000 BC.

Recently, scientists proposed what might have wiped the kingdom out in a groundbreaking study.

They proposed that the kingdom was victim to a brutal sandstorm that resulted in the inability to grow crops, famine and mass social upheaval.

Dr Tsuyoshi Watanabe of Hokkaido University, involved in the study, said in a statement: “Although the official mark of the collapse of the Akkadian Empire is the invasion of Mesopotamia by other populations our fossil samples are windows in time showing that variations in climate significantly contributed to the empire’s decline.”

The study’s abstract tells of how researchers looked at six 4,100 year-old Porites coral fossils from the Gulf of Oman that signalled “a prolonged winter shamal season with frequent shamal days.”

Dr Watanabe and his team compared the ancient coral fossils to modern coral samples, along with meteorological information and found the ancient corals to contain evidence of strong winds typically associated with severe dust storms.