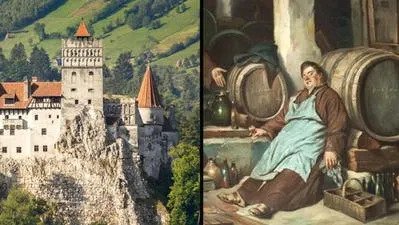 Life in a medieval castle would have been ordered and organised, full of pomp and ceremony, and also very cold and smelly! Essentially, castles were at the heart of Medieval society.

Castles were built in England and Wales after 1066. They cemented a new social system of feudalism in place. Each new castle secured the power of the local lord over his vassals.

To serve the Lord, most castles would have been places of frenzied domestic activity. Life in a medieval castle was filled with a constant hubbub of busied work in the kitchens, preparations for celebrations in the Great Hall, and religious worship in each castle’s own chapel.

However, with such cramped and cold quarters, some castle dwellers did find comfort through chaste-as-heck medieval sex. Life during medieval times was no treat.

Toilets Were Often Just A Bench With A Hole In It

In medieval times, you had to go do your business on a long bench with many holes for many bums. Your waste fell down below to a literal cesspool, and that was the end of it. Again, there were no partitions and no privacy, so you would likely be in full view of all your friends and neighbors while you were doing your thing.

Maybe it was nice to have someone to talk to while you used the bathroom, and maybe people even socialized at the ol’ cesspool. Still, ew. It’s hard to say exactly how people felt about the process because today’s standards for privacy and hygiene just didn’t apply back then.

Maybe it’s because of the bench toilets, or the general lack of hygiene among the lower classes, but castles smelled really awful. And it certainly didn’t help that the toilets offered no privacy and that there was really nowhere to dispose of waste besides a cesspool beneath the toilets.

It wasn’t always easy to clean yourself, as freshwater and a bathtub were often harder to come by for the serving classes. Furthermore, sickness was prevalent among the lower classes, and while the wealthy could easily afford the best medical care, the average castle dweller would have to rely on herbal medicines, if anything at all.

Castles might appear to be fortresses from the outside, but the large and open floor plans on the inside left little room for privacy, especially if you were a servant. The lord and lady of the home would almost certainly have private chambers in which to dress and bathe, but all others who dwelled within the castle walls were forced to spend their days and nights in the constant company of each other.

It was so dark and dingy in most areas of the castle that it might have been nice to have others close by for body warmth. Or perhaps they found other ways to stay warm; however, during the Middle Ages you could get it on with your spouse only for the purpose of procreation. This meant no new sexual positions, and even lusting after your own partner was considered a sin.

Prisoners Went To Dungeons And Were Often Tortured

Prisoners were often kept in the deepest, darkest depths of a medieval castle – and the conditions were often deplorable, as there were certainly no prisoner rights advocates in the Middle Ages. Prisoners were often held for political reasons and should the lord or lady of the castle deem it fit, the prisoner could be tortured.

Trigger warning: The next part is rather disturbing. There were a number of ways medieval people tortured their prisoners, but one that stands out was the act of inserting a rat into the person’s body, allowing it to eat through a victim’s intestines in order to make its way out of the body.

One German researcher found that the torture method was not only meant to torment but to also purify the soul. Many believed that the only way to purify the body of its sins was through pain. So, you might want to think twice before you break the law in a medieval town. Unless you’re into that pain for purification kind of thing.

You Shared Your Home With Rats

Dark, damp, and cold environments are the perfect breeding ground for more than a few horrible things – and rats are one of them. Thus, if you lived in a castle, you by default lived with rats.  While castle dwellers might have gotten used to sharing their home with rats – as they were rather ubiquitous in medieval times – they were still typically afraid of them. The beady-eyed little rodents always struck fear into the hearts of their unwilling roommates; plus rats were one of the cheapest and most effective forms of medieval torture.

Can you imagine befriending a furry little critter, only to find out later that he’ll be front and center for your demise? Nah, it was best to just hate the dirty little buggers.

Contrary to what many people believe about medieval times, people did enjoy taking baths, it just wasn’t always easy to access clean water and a bathtub. Inside castles, there would often be a wooden bathtub that could be transported from room to room for the castle dwellers to bathe in. It wasn’t exactly sanitary or even remotely private, but people were happy to be able to clean themselves from time to time.

It should be noted that medieval populations certainly didn’t have the hang-ups about privacy and hygiene that we do today, but they would probably have preferred to not bathe in full view of their roommates. Not that there is anything wrong with that.

It Was Very Dark And Extremely Cold

Castles were built using stones, and most castles in medieval times were built with defense from enemies in mind rather than comfort. This led to a giant fortresses of stone with small and narrow windows. The stone wasn’t exactly conducive to letting heat in and the small windows let in very little of the sun’s light, leaving most rooms in the castle extremely dark and cold.

Just imagine the freezing servants quarters, which would have been in the deepest, darkest recesses of the castle. The illnesses that go along with damp and cold living spaces would have been rampant among the servants and they would have had little defense against the sicknesses.

There Was The Constant Hubbub Around Preparing For Feasts And Festivals

The constant pomp may have been a tidbit annoying, especially to the people of the lower class who were doing all the work in preparation for these elaborate feasts and parties. Large and lavish meals were the norm in a medieval castle.

Unless you were preparing the meal, in which case you would have your meal in the kitchen, you would sit down to feast with friends pretty regularly. In fact, you were even seated at the meal table in relation to your level of importance. The lord and lady would sit at the head of a large wooden table, of course, while the castle staff would be sat at the back end out of sight. How much of a bummer would it be to prepare delicious food and never be able to sample it for yourself?

Dinners Were Served In The Great Hall, And You Sat According To Status

Some things just never seem to change. Just like the high school cafeterias of today, in medieval times people sat according to their level of importance. The lord and lady sat at the head of the table, and their meals were served first and consisted of gourmet courses with exotic spices and specialties. The food for the less important dinner attendees would have been far less extravagant, and those folks would have sat on the darker and colder end of the long table.

But hey, at least they got a spot at the table. More than 85% of the town’s people were considered peasants and worked outside of the castle, and were therefore left to fend for themselves and their families when it came time to eat.

Stairwells Were All Built Clockwise

As with most design decisions that went into building medieval castles, staircases were always constructed clockwise for reasons of defense. If an enemy were to attack, climbing up a staircase would limit how much they could maneuver their swords as any right-handed swordsman would be blocked by the castle’s wall.

On the other hand, the guards coming down the stairs would have the advantage of a full swing and would more easily eliminate the opposition. Even the steps themselves varied in size so as to trip up anyone unfamiliar with the specialized footing.