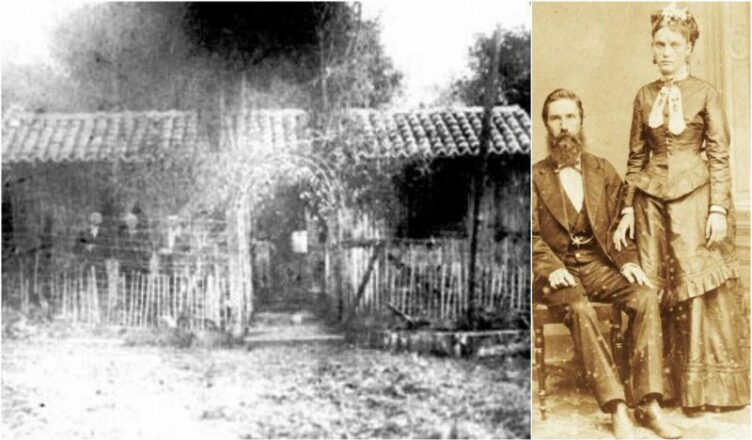 The Confederados – At the end of the American Civil war 20,000 Confederates immigrated to Brazil, where slavery was legal and formed a community

The civil war ended in 1865 with the loss of the Confederates and the Union’s abolition of slavery, causing more than 600,000 military casualties and nearly depleted the Southern economy.

The North disbanded the Confederate army and began a period known as the Reconstruction. It wasn’t exactly welcomed in the South, and some decided to leave the United States for somewhere else.

“Somewhere else” turned out to be the Empire of Brazil, spanning a vast space taken up by today’s Brazil and Uruguay. The Emperor at the time, Dom Pedro II, was interested in developing his own cotton and sugar-cane industry. For this, he needed skilled farmers, and the Southern émigrés seemed fit for the job.

Most of them were from Alabama, Texas, Louisiana, Mississippi, Georgia, and South Carolina and came from large households that relied heavily on agriculture.

The Emperor offered them financial help with travel expenses, subsidized the price of land, and let them build plantations tax-free. Some 20,000 people moved to Brazil between 1865 and 1885, where slavery was still legal. (The numbers vary, with some sources claiming that a more realistic figure is around 10,000 settlers.)

The Confederate settlers inhabited various places. Some saw the appeal in developing the urban areas of Rio De Janeiro and Sao Paolo, while others decided to try their luck in the vast and scarcely inhabited northern and southern Amazon region, like Santarem and Parana.

The colonies remained a cloistered community for years to come. The Confederate refugees married among themselves and spoke only English. They also invested in separate schools, churches, and cemeteries, importing priests and teachers from the United States.

The colonists founded the first Baptist Church in Brazil, together with the Campo Cemetery in which members of the Protestant religion were buried, according to their tradition.

Alison Jones, who was a third-generation descendant of the original settlers, described her experience growing up in such an environment to the Seattle Times in a 1995 interview: “I remember when I was 4 years old, I was lost in a textile factory and I couldn’t tell the people anything because I only spoke English. I didn’t learn Portuguese until I started school.”

Some historians interpret this migration as motivated by the fact that Brazil hadn’t abolished slavery until 1888, and that former slave owners of the South wanted to continue their exploitative way of living somewhere else. But Alcides Gussi, an independent researcher of the State University of Campinas, Sao Paolo, begs to differ.

Even though slavery was legal, Gussi claims that only four families actually owned slave labor, with a total number of 66 slaves, in the period between 1868 to 1875.

Whether it was because of the dire financial situation among most of the settlers, or because the former Confederate slave owners realized their mistakes, remains unclear. Perhaps it was a bit of both.

Some cases were recorded in which the freed slaves decided to accompany their former masters. Most notable was the story of Steve Watson. Watson went to Brazil, together with Judge Dyer of Texas, his former owner, who assigned him to be an administrator of a sawmill. At one point, Dyer decided to return to the U.S., due to a combination of homesickness and financial failure. He left all his property in Brazil to Watson.

Judith McKnight Jones, a great-granddaughter of one of the original American settlers, tried to explain the reasons for her family’s departure from Texas during the migration to the Seattle Times:

“They came here because they felt that their ‘country’ had been invaded and their land confiscated. To them, there was nothing left there. So, they came here to try to re-create what they had before the war. I grew up listening to the stories. They were angry and bitter. When they talked about it, moving here, the war, leaving their homes, it was always a very sore subject for them.”

Nevertheless, the American settlers managed to form communities and preserve their cultural heritage within their new country. Two new towns emerged from their small, disclosed communities―Santa Bárbara d’Oeste and Americana.

Both of these settlements are located in the Brazilian state of São Paulo and are part of the Metropolitan Region of Campinas. These towns are now the home of a number of descendants of the American colonists, who remain connected through Brazil’s Fraternity of the American Descendants.

The Confederados, as they are called by the Brazilians, hosts the annual Festa Confederada―a ceremony dedicated to preserving the memory of their ancestors. The festival features Confederate flags and uniforms, dances, and music from the period, together with American Southern cuisine spiced up with Brazilian flavors.

The event’s main purpose is fundraising for the Campo Cemetery, as the burial ground remains perhaps the most powerful symbol of their community.

Even though the descendants have almost completely assimilated into Brazilian society, they hold affection for the short-lived Confederate States of America, which they consider their original homeland.