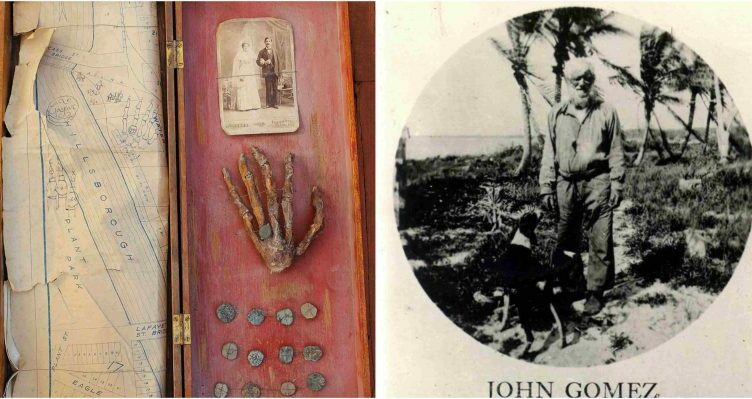 It is always good to have an additional hand to help when it comes to spring cleaning. It is certainly not what Lopezes expected about finding a real human hand, but this is just what this Florid family found in the attic of their grandparents.

Cleaning the dreaded attic turned up a darling wedding photo of the Lopezes grandparents, but it also uncovered some interesting but creepy finds.

Mike Lopez said his sister was not expecting to find a human hand, a treasure map, and gold coins. He spoke to local TV news network WFLA about the discovery, and the story kept getting stranger.

The items found by his sister were neatly packed inside a wooden box. To add more to the story, the treasure map contained the name of the infamous mythical pirate “Gaspar”.

This story seems to border on the outer limits, but a local historian doesn’t believe that the hand belongs to the famed pirate.

The pirate, whose full name is José Gaspar, is a legend from the 18th and 19th centuries. He has taken his place in local folklore and culture and has an annual festival in his honor.

But Rodney Kite-Powell, a Tampa-Bay curator, doesn’t believe that the legendary figure was even real. He confirmed that indeed the Lopezes have found a real human hand, but as for “Gasparilla”, that was a myth.

The gold coins were too thin and too old to pass as authentic Spanish treasure. He weighed in on the treasure map as well and believes it was a blueprint for the area during the 1920s and 1930s, but nothing more.

How did the legend of Gaspar begin? The story of the famed pirate may have been the tall tale of a U.S. naval officer. As the story goes, the pirate Jose Gaspar was hunting for the USS Enterprise in 1821; onboard was Juan Gómez, the man who lived to tell the tale.

According to the story, Gaspar had underestimated the USS Enterprise as an easy target. After sustaining heavy damage, the famed Spanish pirate tied himself to his anchor and leaped to his watery death– apparently not wanting to be killed at the hands of the enemy.

There are many different versions of the pirate’s origins and life, but there is no real historical evidence that he ever existed.

This does not stop the legend of Gasparilla from living on in the Florida folklore; the story of his life is even retold in a hotel brochure at the site where supposedly his treasure was buried, The Huffington Post reported.

This tale doesn’t give the Lopezes a helping hand in solving the mystery of the finds from their grandparents’ attic.

The experts don’t believe that they find is a real treasure map or that the legend of Gaspar is anything more than a children’s story or a folk tale that adds to the culture of the area.