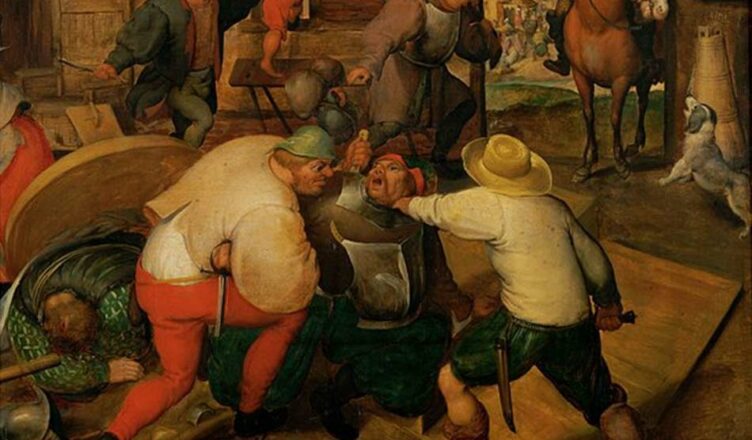 An interactive map reveals medieval London’s meanest streets by detailing the locations and often gruesome methods of more than 140 murders in the city between 1300 and 1340.

The map, based on an analysis of 14th-century scrolls, shows Britain was up to 20 times more violent in medieval times than it is today. One man was shot with an arrow during a student street brawl, while another was beaten to death for littering with eel skins, the records show.

In the square mile (2.6 square kilometers) of the City of London between 1300 and 1340, there were 142 murders, and researchers discovered that more took place in religious buildings such as churches than in brothels.

Rather than gangs of youths from rival postcodes fighting one another, in the 14th century, the records show that medieval guilds often resolved disputes with violence, with many victims dispatched in colourful ways.

In one feud in 1325, members of the Goldsmith guild walked down Cheapside to beat up members of the Saddlers guild. A similar row broke out between the Skinners and the Fishmongers guild. One saddler, John of Vyse, was beheaded with a sword, beaten with staff and had his leg cut off with an ax.

Death could be a protracted business.

One saddle-maker who had his fingers cut off by a rival died of his wounds – and consequently became a murder victim – a full three weeks later. Cambridge University criminologist Professor Manuel Eisner plotted all cases of murder from surviving coroners rolls onto a digital map of the city.

The research is a fascinating look into the days, times and favored methods – and is available online for people researching their family trees. Estimates for London populations in the 14th-century range from 40,000 to 100,000.

Assuming a city of 80,000, Professor Eisner suggests that medieval London murder rates were about 15-20 times higher than we would expect to see in a contemporary UK town of equivalent size.

Professor Eisner said; ‘Following notification of violent death, the Coroner and Sheriffs would summon a jury from the local area to investigate, then record all the findings.

‘The events described in the Coroners’ Rolls show weapons were never far away, male honour had to be protected, and conflicts easily got out of hand. They give us a detailed picture of how homicide was embedded in the rhythms of urban medieval life.

The two main murder ‘hot spots’ that emerge is the stretch of Cheapside from St Mary le Bow church to St Paul’s Cathedral and the second is the triangle of streets around Gracechurch, Lombard and Cornhill streets, around Leadenhall market.

The research found 68 murders took place in London’s busy streets and markets, with 21 percent occurring in private residences. Religious buildings (six murders) appear to have been more dangerous than brothels (two murders). The killing was more common on the weekend – as is also the case now – with a third of murders (31 percent) taking place on a Sunday.

‘Sunday was the day when people had time to engage in social activities, such as drinking and gaming, which would often trigger frictions that led to the assault,’ Professor Eisner said.

Around 77 percent of murders were committed between early evenings, ‘around the hour of vespers, and the first hours after curfew’. Daggers and swords dominate the list of murder weapons, used in 68 percent of all cases. Thick ‘quarterstaff’ poles designed for close combat were used in 19 percent of cases.

Around 92 percent of killers were men. In only four cases, a woman was the only suspect. About a third of the cases had more than one suspect, with a number of murders involving brothers or servants helping masters.

Professor Eisner said comparisons with modern society are problematic. ‘We have firearms, but we also have emergency services. It’s easier to kill but easier to save lives,’ he added.

‘Over 18 percent of victims survived at least a week after the initial trauma, probably dying eventually from infections or blood loss.

‘The trend in London is in line with the long-term decline of homicide found across cities in Western Europe, a decline that led to the pacified spaces that were essential for the rise of urban life and civility in Europe.’