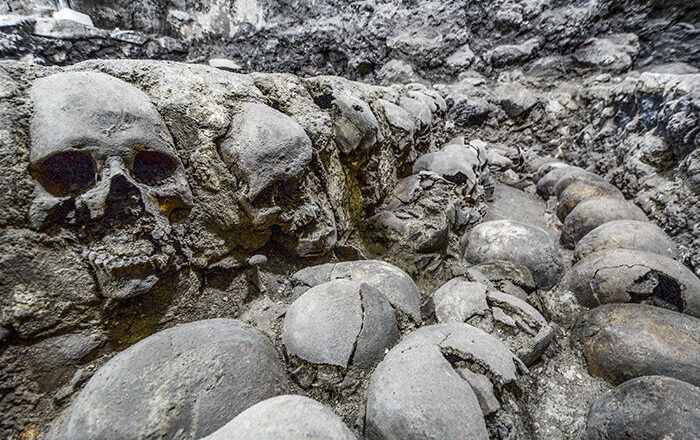 The National Institute of Anthropology and History of Mexico (INAH) archeologists discovered in 2015 a barbaric ‘ trophy rack ‘ near the Templo Mayor site, one of the largest temples in the Aztec capital of Tenochtitlaan, which later became Mexico City.

Now they claim that the discovery was only the tip of the iceberg and that the ‘ skull tower ‘ was just a small portion of the vast collection of skulls known as Huey Tzompantli that was the size of a basketball court.

The new research slowly reveals the large scale of human sacrifices made in honor of the gods. According to the latest science research, the first prisoners were taken to the Temple Mayor of the city or the major temple, where priests extracted their already beating heart.

The bodies were then decapitated and priests removed the skin and muscle from the corpses’ heads. Large holes were carved in the sides of the skulls so that they could be positioned on a large wooden table.

They were then placed in Tenochtitlan’s tzompantli, an enormous rack of skulls built in front of the Templo Mayor, a pyramid with two temples on top.   After months or years in the sun and rain, the skulls would begin to fall to pieces, losing teeth and even jaws.

At this point, priests would remove it to be fashioned into a mask and placed in an offering, or use mortar to add it to two towers of skulls that flanked the rack. Some Spanish conquistadors wrote about the tzompantli and its towers, estimating that the rack alone contained 130,000 skulls.

The skull edifices were mentioned by Andres de Tapia, a Spanish soldier who accompanied Cortes in the 1521 conquest of Mexico. In his account of the campaign, de Tapia said he counted tens of thousands of skulls at what became known as the Huey Tzompantli.

The skulls were seen by the aztecs as ‘the seeds that would ensure the continued existence of humanity’ and a sign of life and regeneration, like the first flowers of spring, archaeologists believe.

Now, archaeologists are beginning to study the skulls in detail, hoping to learn more about Mexican rituals and the postmortem treatment of the bodies of the sacrificed.

‘This is a world of information,’ said archaeologist Raùl Barrera Rodríguez, director of INAH’s Urban Archaeology Program and leader of the team that found the tzompantli, according to Science.

In two seasons of excavations, archaeologists collected 180 mostly complete skulls from the tower and thousands of skull fragments. Cut marks confirm that they were ‘defleshed’ after death and the decapitation marks are ‘clean and uniform.’

Three quarters of the skulls analyzed belonged to men, mostly aged between 20 and 35. Some 20 percent belonged to women and the remaining 5 percent were children.

The researchers say the victims were in ‘relatively good health’ before they were sacrificed. The size and spacing of the holes that once contained the wooden posts also allowed the team to estimate the tzompantli’s size for the first time.

They say it was 35 meters long and 12 to 14 meters wide, slightly larger than a basketball court, and 4 to 5 meters high.

The researchers have also found skulls apparently stuck together with mortar—remnants of one of the towers flanking the tzompantli.  At its largest, the tower was nearly 5 meters in diameter and at least 1.7 meters tall.

Combining the two historically documented towers and the rack, INAH archaeologists now estimate that several thousand skulls must have been displayed at a time.

‘We were expecting just men, obviously young men, as warriors would be, and the thing about the women and children is that you’d think they wouldn’t be going to war,’ said Rodrigo Bolanos, a biological anthropologist investigating the original 2015 find.

‘Something is happening that we have no record of, and this is really new, a first in the Huey Tzompantli,’ he added.

Raul Barrera, one of the archaeologists working at the site alongside the huge Metropolitan Cathedral built over the Templo Mayor, said the skulls would have been set in the tower after they had stood on public display on the tzompantli.  Barrera said 676 skulls had so far been found, and that the number would rise as excavations went on.