After decades of excavations, researchers believe they have finally found the ruins of the Biblical city of Sodom. Experts in Tall El Hammam area in Jordan claim that the ruins of a “monstrous” bronze age city refer to the Biblical portrayal of God’s ruined city.

This site may not only have been the largest town in the area, as ment-ioned in the Bible, but also located to the east of the Jordan River, dates back to 3500 BC and 1540 BC. Within the Book of Genesis the bulk of references to Sodom and Gomorah existed. 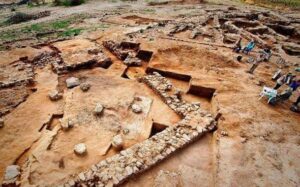 Both locations were kingdoms situated on the Jordan River plain, just north of where the Dead Sea is now located, and are described in the bible as being plush, green and well-watered.

Sodom is one of the largest cities in eastern Jordan mentioned in the book of Genesis and the New Testament in particular. It has been des-cribed as located on a shared trading route and was reportedly heavi-ly fortified by towers and large , thick walls because of its size.

In the Bible, Sodom was said to have been destroyed by God after his angels failed to find righteous men within its walls. By comparison, the site, at Tall el-Hamaam, dates back to between 3500 and 1540 BC.

It is said to be the largest city that would have existed in the region between five and 10 times larger than other cities in the area – making it an obvious choice for the site.

Steven Collins from Trinity Southwestern University in New Mexico, who led the project, said it was a ‘monstrous’ city compared to others in the area from the same period.

Little was known about the Bronze Age in the south of the Jordan River Valley, before excavations began in 2005,but the huge city points to a sophisticated society.

Team claims to have found evidence of a city that was expanded and given defences of thick walls and ramparts,including a 5.2-metre thick mudbrick wall of 10 metres high.

The city was continuously expanded and fortified, with evidence for thick walls and ramparts, including one wall that was a 17ft(5.2 metre) thick and 32ft (10 metres) high.

This wall featured gates, watchtowers and at least one roadway.

During the middle Bronze Age, this wall was replaced by a huge, 23ft-wide (7 metre) rampart with a flat top that doubled as a ring road around the city.

The team believes the city it has discovered must be Sodom because evidence suggests it thrives on the banks of the river Jordan and was an important trade route, as described in the Bible.

Further evidence to support the claims is that Tall el-Hamaam was suddenly deserted at some point time towards the end of the middle Bronze Age.

‘What we’ve got on our hands is an important city-state, major city-state that was, for all practical purposes, unknown to scholars before we started our project,’ said Collins. 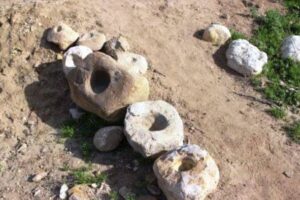 ‘Tall el-Hammam matches the description of the area where Sodom was located according to the Bible’ as the largest city of the fertile east Kikkar area.

‘So, I came to the conclusion that if one wanted to find Sodom, one should seek the largest city that existed in this area during the Bronze Age, in the time of Abraham.

‘When we explored the region, Tall el-Hammam was an obvious choice,as it was five to 10 times larger than the other Bronze Age cities throughout the region, even those found beyond Jordan.’

Mr Collins said: ‘We know very little about the Bronze Age in the south of the Jordan River Valley. Most archaeological maps of the area were blank.

‘It became an uninhabited wasteland for over 700 years but then, after those seven centuries, it started to flourish again – as indicated by the huge iron gate that leads into the city.’

This has been suggested because the researchers have found few artefacts from the late phase of the period in comparison to other settlements in the region.

The area remained deserted for around 700 years, after which the city was repopulated, evidenced by artefacts and remains of an Iron Age settlement.

Archaeologists involved in the project, led by Steven Collins from Trinity Southwestern University in Albuquerque, New Mexico, believe this evidence, when taken with the city’s prime location, makes it the best candidate for Sodom.

‘Tall el-Hammam seemed to match every Sodom criterion demanded by the text,’ he added.

The destruction of Sodom, along with Gomorrah was recorded in numerous parts of the Bible, including Genesis and the New Testament, as well as in the Qur’an.

THE JUDGEMENT OF SODOM

In Genesis 18, three angels appearing as men are said to have gone to Abraham in the plains of Mamre.  After these angels received the hospitality of Abraham and his wife, Sarah, God told Abraham he would destroy Sodom and Gomorrah, because their ‘sin is very grievous’.

Abraham asked if God would spare the city if 50 righteous people were found in it, to which God agreed. The angels were then sent to Sodom to find the righteous men and were met by Abraham’s nephew Lot.

Men of the city later surrounded Lot’s house and said: ‘Where [are] the men which came in to thee this night? Bring them out unto us, that we may know them.’

Lot refused and, instead, offered them his two virgin daughters which had ‘not known man’. The men refused and the angels warned Lot that the city would be destroyed, advising his family to leave.  God is then said to have destroyed Sodom and Gomorrah with ‘brimstone and fire’.

The Old Testament story describes how God destroyed the ‘wicked sinners’ of Sodom with fire and brimstone but allowed Lot, the city’s one good man, to flee with his family. Both cities have since been used as metaphors for vice and homosexuality.

Dr Collins set his sights on finding the largest city that existed in Kikkar during the Bronze Age and he said Tall el-Hammam was the obvious choice, being significantly larger than other cities from the time of Abraham in the area.

Even if the location is not Sodom, the researchers said the discovery is still important because it has shed light on a vast lower and upper city. 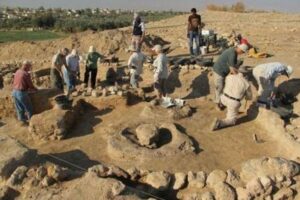 The rampart system would have required millions of bricks and hundreds of workers, showing a demonstration or organisation and technology. Evidence also suggests the ruined city had gates, towers, a main road and squares.

Dr Collins said the city was abandoned at the end of the Bronze Age, perhaps following an earthquake, but other experts have suggested an asteroid may have been to blame.

The lack of inhabitants is suggested by the presence of hardly any artefacts from the Late Bronze Age. ‘It became an uninhabited wasteland for over 700 years but then, after those seven centuries, it started to flourish again – as indicated by the huge iron gate that leads into the city,’ he said.

The city was rebuilt in the Iron Age, between 1,000 and 332BC, including a lavish gateway, city wall, and houses which may have made up a cultic centre.