Archaeologists in Mexico have uncovered the ruins of the Maya ancient civilization, which date back 7,000 years and provide further insight into their enigmatic everyday lives. 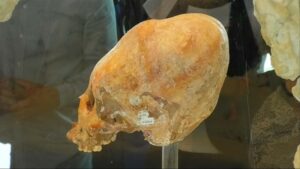 According to experts, the age of the bones discovered corresponds to a period when humans transitioned from hunters to sedentary lifestyles.

In the Tacotalpa municipality of Tabasco state in southern Mexico, three Maya skeletons were discovered in the Puyil cave. 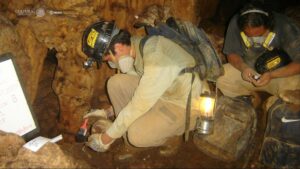 Experts have calculated that one is up to 7,000 years old, while the remaining two date back around 4,000 years.

Archaeologist Alberto Martos said: “Seven thousand years old is what we’ve just placed it, which is the period of transition from being hunters to sedentarism.

“There were different groups during this time that used the caves, clearly it wasn’t a domestic cave.

“In prehistoric times it was probably used for rituals and cemeteries so as to dispose of remains of people.

“For the Maya, it was a cave of ancestors.

“This cave was used by the Maya, they respected the remains that were already there and left their own remains inside.”

Earlier this month, scientists claimed an enormous drought that swept across Mexico around 1,000 years ago triggered the demise of the Mayas.

Those studying the climate at the time of the ancient civilisation found rainfall fell by up to 70 per cent at the time the region’s city-states were abandoned.

Nick Evans, a PhD student at the University of Cambridge, was part of a team of international researchers that was able to calculate the conditions on the Yucatan Peninsula at the time of the decline using sediment samples from a local lake.

He said: “The role of climate change in the collapse of Classic Maya civilisation is somewhat controversial, partly because previous records are limited to qualitative reconstructions, for example, whether conditions were wetter or drier.

“Our study represents a substantial advance as it provides statistically robust estimates of rainfall and humidity levels during the Maya downfall.”

The Maya civilisation was noted for its hieroglyphic script – the only known fully developed writing system of the pre-Columbian Americas.

As one of the most dominant civilisations in Mesoamercia, they built cities with elaborate ceremonial buildings and huge stone pyramids to form large parts of Mexico, Honduras, Guatemala and El Salvador.

They also made advances in agriculture, calendar-making, and mathematics, reaching their peak at around the sixth century AD. 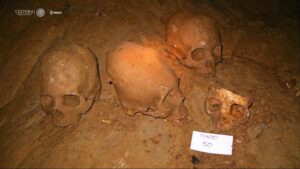 It is thought the Mayas invented the concept of ‘zero’.

This allowed them to work out complex calculations and to create detailed and accurate calendars.

But by 900AD, their stone cities were deserted, creating much mystery around the reasons for their demise.

In addition to the drought that swept across Mexico, other theories for their demise have included overpopulation, military conflict or a major environmental event.