In a field three miles south of Cambridge, the bones of a mysterious Anglo-Saxon princess who died thirteen and a half centuries ago have been discovered.

She died at the age of 16 and was buried with a small solid gold Christian cross encrusted with garnets on her chest, lying on a special high-status funerary bed.

Her true identity has yet to be revealed. However, she was most likely a member of one of the period’s newly Christianized Anglo-Saxon royal families.

She was buried fully clothed, her bronze and iron chatelaine (belt hook) and purse, still attached to her leather belt.

A clue to the circumstances of her death is the presence of three other individuals buried in separate graves alongside her (two women aged around 20 and one other slightly older individuals of indeterminate sex, but conceivably female).

It’s likely that they died at the same time – probably from some sort of epidemic. Significantly, the Anglo-Saxon Chronicle mentions that England was devastated by the plague in 664 AD (around the very time that the archaeological evidence also suggests they died).

The archaeological investigation – carried out by Cambridge University Archaeological Unit – has also revealed that they were interred adjacent to a high-status settlement consisting of a 12-metre long timber hall and at least half a dozen other buildings with substantial semi-subterranean storage cellars.

Among the finds unearthed were fragments of posh French-originating shiny black ceramic wine jugs – in England a type of pottery previously found mainly on monastic sites.

The female graves, the high-status nature of the site and the Christian burial rite all combine to suggest that the princess and her companions may well have been nuns – and that the settlement may have been part of a nunnery.

It’s known that the various newly Christianized Anglo-Saxon monarchs of the time competed with each other to establish monasteries and nunneries as a proof of their Christian piety. Indeed it’s conceivable that the princess’s parents enrolled their daughter in such a nunnery to further demonstrate their commitment to their new faith (a common practice at the time).

The area itself probably enjoyed some sort of royal or otherwise elevated status inherited from Roman and immediately post-Roman times when it formed part of a native Romano-British territory centred on Cambridge and known as the Granta Saete – the territory (saete) of the River Granta (now more often known as the Cam).

Just 500 metres to the north of the princess’s grave in the village of Grantchester (derived from the ‘Granta Saete’ territorial name) – the site of what was once a substantial Roman villa, the owners of which conceivably became the area’s ruling family.

Historians believe that the Roman villa, the high-status Anglo-Saxon settlement and the princess’s grave were in one of several quasi-independent mini-kingdoms which acted as buffer states between the larger kingdoms of East Anglia and Mercia (central England).

The princess may well, therefore, have been the daughter of a mid-7th-century king of Mercia or East Anglia or of one of the buffer states in between. 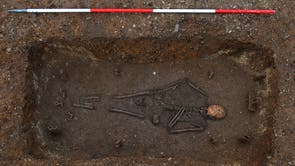 Continuing scientific investigations over the next few months are expected to reveal more information about the princess, her companions and the site as a whole. Isotopic tests are likely to reveal their geographical origins by demonstrating where they had spent their early childhoods.

Other isotopic analyses will reveal their diet. Efforts will also be made to reconstruct aspects of the princess’s clothing from fragments of mineralized textile which survived in her grave.

“This is an incredibly important and exciting discovery which is already shedding remarkable new light on the early years of English Christianity,” said Alison Dickens, a senior manager at the Cambridge University Archaeological Unit.

The excavation carried out near the village of Trumpington, south of Cambridge, and the on-going scientific investigations, have been funded by the Trumpington Meadows Land Company – a joint housing development venture between London’s Grosvenor property company and USS, the UK-wide universities pension scheme.