Croatia has discovered a remarkably well-preserved wreck of a 2,000-year-old Ancient Roman’sewn ship’ that was stitched together with ropes and wooden nails.

The ship was discovered at the Porta de Mar archaeological site on Pore’s historic waterfront, where it had sunk near an ancient pier. 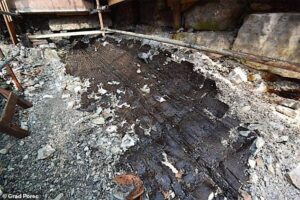 Poreč was part of the Roman province of Dalmatia two thousand years ago, and the town’s protected harbour made it ideal for both defence and maritime trade.

Experts are calling the ship Croatia’s greatest archaeological discovery of the century — one that is shining light on ancient shipbuilding practices.

Found embedded in the mud, the 16 feet (5 metres) -the long wreck of the sailboat retained many of its original timbers. 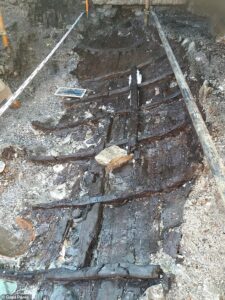 ‘It was well preserved because it was at a certain depth in the soil and could not be penetrated by oxygen,’ archaeologist Klaudia Bartolić Sirotić told Croatia Week.

Much of the ship’s ‘formwork, ribs, and keel’ have survived, Ms Bartolić Sirotić told Archaeology.org — and the researchers were able to observe the imprint that the rest of the vessel had left in the mud to determine the type of ship it was.

The team believe that the vessel had a single sail — and was likely a small private fishing boat. 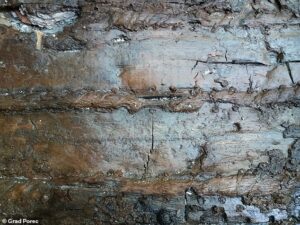 So-called ‘sewn ships’ are characteristic of the boatwrights of the northern Adriatic back in the first century AD — and featured planks in the outer hull that were essentially stitched together, using ropes and wooden nails known as ‘spots’.

‘Every stitch that is made is recorded [in the wreck],’ Ms Bartolić Sirotić told Croatia Week.

Large wooden nails were then used to attach the outer hull to the inner frame.

The Porta de Mar find is not unique to Croatia — however, most of the sewn ships from the country date back to earlier periods and were unearthed by marine archaeologists underwater, making them much harder to study.

‘This specimen from Poreč is one of three boats found on land that are not part of an underwater archaeological survey,’ Ms Bartolić Sirotić added. 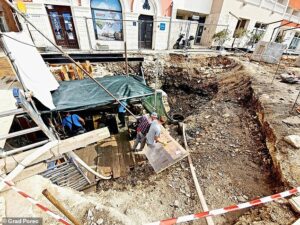 The vessel was unearthed as a result of a redevelopment project that will see the Poreč renovated and made more pedestrian-friendly.

In the meantime, the archaeologists are working to complete their study of the boat where it was found before the remains are removed and conserved with a mind towards being displayed to the public at the  Poreč Museum.