Near the Giza pyramids in Egypt, archaeologists found two ancient homes. More than 4,500 years ago, the structures may have housed officials in charge of overseeing the production of food for a paramilitary force.

The residences were discovered in an ancient port at Giza that flourished during the construction of Menkaure’s Pyramid. (Menkaure was an Egyptian pharaoh who ruled between 2490 and 2472 B.C.)

One of the structures may have housed an official who oversaw the containment and slaughtering of animals for food, while a priest who was part of an institution called the “wadaat” may have lived in the other home, archaeologists said.

Seals found near the suspected priest’s residence mention the wadaat, an ancient Egyptian institution whose priests could be high-ranking officials in government, said Mark Lehner, the director of Ancient Egypt Research Associates, the organization that led excavations at the two homes. 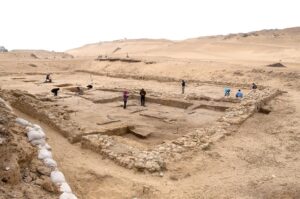 This residence is attached to a structure that may have been used for malting, suggesting that its occupant oversaw brewing and baking operations at the time, Lehner said.

The two residences are located near a series of structures called galleries, which may have housed a paramilitary force at Giza, Lehner said.

These galleries may have held more than 1,000 people. Any food produced near the two residences was likely meant mainly for people living in the galleries, although some of the food could have reached people working at the Menkaure pyramid, Lehner said.

Just the food necessary to feed those living in the galleries would have been immense. The amount of emmer wheat required may have been 877.54 kilograms (1,934 lbs.) per day, calculated Claire Malleson, an archaeobotanist with Ancient Egypt Research Associates, in a paper published in the book “Exploring the Materiality of Food Stuffs” (Routledge, 2017).

People would have had to bake this emmer wheat and turn it into bread. Those living in the galleries and laboring on the Menkaure pyramid would also have required a massive amount of meat.

The two residences are located in what Lehner believes was “basically the national port of its time,” with goods and materials coming in from all over Egypt and the eastern Mediterranean.

Archaeologists previously found other residences in this port, including a 21-room house used by scribes who worked in the port.

A port was likely also in operation at Giza when the Great Pyramid was being constructed in the name of the Pharaoh Khufu (reign circa 2551–2528 B.C.).

A logbook written by an inspector named Merer, who lived during the 27th year of Khufu’s reign, appears to contain references to such a port. This logbook is in the process of being deciphered. Excavations will resume in this area in 2019.